Lawyers in two California cities have expanded their civil lawsuit against the online ride-sharing service Uber. Court records show that the company has hired people previously convicted of murder and sex crimes, despite background checks.

The district attorneys of San Francisco and Los Angeles filed an updated complaint against Uber on Tuesday. The complaint stated "systemic failures in Uber's background check process" were revealed after they first filed against Uber in December. 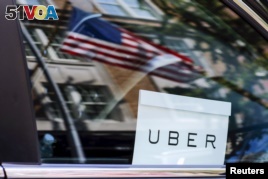 An Uber sign is seen on a car in New York City.

San Francisco District Attorney George Gascon said in a statement Wednesday, "I support technological innovation. Innovation, however, does not give companies a license to mislead consumers about issues affecting their safety."

"We continue to work on improving safety for riders and drivers before, during and after the trip," it said.

The company added that last year it had denied more than 600 people who had applied to become drivers, because they had been convicted of violent and drunken driving crimes.

In the original complaint filed in December, city prosecutors said that Uber drivers work at airports without proper permits. They also said the company has been charging an extra $4 fee to passengers traveling to airports, without paying anything to the airport.

Uber operates its ride-share program in 57 countries and has an estimated value of more than $40 billion. It is one of the fastest-growing sharing-economy companies.

The company has been questioned for its safety record in other countries, as well. In December, the Indian government called for all unregistered taxi services to halt operations, after the reported rape of a woman by an Uber driver in New Delhi.

Uber has also faced bans in Germany, Spain and Thailand.

convict - v. to proven that someone is guilty of a crime in a court of law

background check - n. the process of looking up criminal and/or financial records of an individual or an organization

screening - n. the act of examining people or things in order to decide if they are suitable for a particular purpose

innovation - n. the act or process of introducing new ideas, devices, or methods

sharing economy - n. a business concept that uses the ability (and the preference) for people to rent or borrow goods rather than buy and own them.