Update Required To play the media you will need to either update your browser to a recent version or update your Flash plugin.
By Bryan Lynn
16 May, 2018


California has become the first U.S. state to approve plans to require newly-built homes to include solar equipment.

The state's Energy Commission voted 5-0 to approve the new rules, which are to take effect in 2020. The rules will cover most newly built residential buildings up to three stories high.

California has set a goal of filling half of its electricity needs with renewable energy by 2030. Officials said they had reached 30 percent by the end of 2017. The state's Governor, Jerry Brown, plans to hold an international climate meeting in September.

The Energy Commission said the cost of adding solar equipment to a single-family home would be about $9,500. But, the group added that homeowners would save at least $19,000 in energy costs over 30 years.

The rules were approved after getting widespread support from builders, utility companies and solar equipment manufacturers. 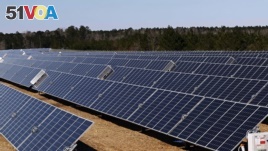 These are some of the 206,000 polycrystalline solar panels that make up the 540-acre site solar project in Lamar County near Sumrall, Miss., Wednesday, March 7, 2018. (AP Photo/Rogelio V. Solis)

Robert Raymer is the technical director for the California Building Industry Association. He says the action marks a step forward for the wider use of solar power in the U.S. "You can bet every other of the 49 states will be watching closely to see what happens," he told the Associated Press.

Solar companies praised the new requirements, which officials have said will likely raise demand for solar equipment in California by 10-15 percent.

Tom Werner is head of California-based solar company SunPower. He told Reuters the decision was another example of California environmental policy becoming a model for other states to follow.

The Solar Energy Industries Association called it a "historic decision for the state and the U.S." It estimated the action would produce "huge economic and environmental benefits," including bringing tens of billions of dollars into California.

California is already the nation's number one market for solar equipment sales. At least 5 million homes in the state are estimated to currently use solar power.

But some individuals and groups criticized the new rules.

Some legislative and community leaders argued that Californians cannot afford to pay any more for housing in what is already an extremely high-priced market.

"That's just going to drive the cost up and make California, once again, not affordable to live in," said California Assemblyman Brian Dahle.

Severin Borenstein is an energy economist at the University of California, in Berkeley. He sent an email to the head of California's Energy Commission to urge the state to reconsider its decision.

He expressed his belief that it is a mistake for California to approve such a policy instead of centering on efforts to develop large solar farms to produce renewable energy. He said these farms would cost much less to operate.

"Every energy economist I know is shaking their head at this," he told the Wall Street Journal. "In many ways, this is setting the wrong example," he added.

Bryan Lynn wrote this story for VOA Learning English, based on reports from the Associated Press, Reuters and other sources. Mario Ritter was the editor.

solar – adj. of or relating to the sun

residential – adj. of or relating to the places where people live

renewable – n. any naturally occurring source of energy, such solar or wind

greenhouse gas – n. carbon dioxide and other gases that scientists have linked to rising temperatures in Earth's atmosphere

emission – n. something released into the air, such as a gas

utility – n. organization that supplies the public with water, gas, or electricity

bet – v. to think that something will probably or certainly happen

benefit – n. something that helps or gives an advantage

affordable – adj. able to be bought by most people