Update Required To play the media you will need to either update your browser to a recent version or update your Flash plugin.
By Alice Bryant
14 November 2020


Harvest season in Northern California's wine country is what dream marriage ceremonies are made of. Its colorful crops and golden sunsets give the ceremonies the beautiful imagery that brings millions of visitors each year.

But harvest season now comes at the same time as another yearly event: wildfires.

In three of the past four years, major wildfires caused by a changing climate have destroyed parts of the world-famous region.

Images of burning wineries and people fleeing their homes made Ash Mintern delay a trip with his girlfriend to wine country. He had hoped to travel there from Tampa, Florida to ask her to marry him. 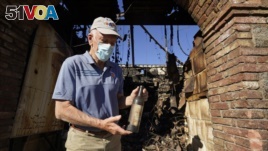 Dario Sattui holds one of the more than 100,000 bottles of wine lost when fire devoured a building near his Tuscan-style castle, Castello di Amorosa in Calistoga, Calif., on Thursday, Oct. 15, 2020. (AP Photo/Eric Risberg)

When I saw that people were leaving the area, I did not want to take a risk, Mintern said.

"If the fires make major news every year, it's going to keep people from wanting to make long-term plans to vacation here," said Bob McClenahan. He is a photographer who lost all of his wedding jobs this year.

The coronavirus crisis was already hurting Napa and Sonoma counties. It ended wine tastings and large gatherings of any kind.

Closed wineries quickly moved to hold online tastings and offered wine club memberships. The region started to slowly recover in late spring when restaurants and wineries reopened to outdoor drinking and eating. But in August, a series of lightning storms led to wildfires that covered the area in thick smoke.

Then on September 27, a small fire that began near St. Helena was quickly pushed by winds across Napa Valley's green hills. It burned down to the valley floor and destroyed hundreds of homes before making its way to Sonoma County.

The two fires followed huge wildfires last year and in 2017.

Still, most of the countryside, winemaking factories and tasting rooms that bring wine lovers to Northern California have escaped harm. But the mental picture of the area in flames threatens business across the region.

That has led state tourism officials to finance a study to examine how the threat of fires affects people's reactions and behavior. Some areas are attempting to move their busy season to spring.

When people see frightening pictures of wineries burning, said David Pearson, they imagine a whole region is destroyed. Pearson supervises the Meadowood resort, whose owners plan to rebuild what was burned by the fire.

Scientists say warmer temperatures and a lack of rain are causing plants and trees to burn easier. This creates the conditions for wildfires to grow quickly and burn with more intensity. California's fire season has been starting earlier and ending later. This year's historic season began with the lightning storms. So far, about 9,000 wildfires burned a record 1.6 million hectares of land. More than 10,000 structures have been destroyed or damaged. And there have been 31 fire-related deaths.

It is too soon to predict the long-term effects of the 2020 fires. But the study will try to find out whether the fires have affected people's decision to visit the state, said Caroline Beteta. She is president and CEO of Visit California. The organization will select a research partner in the coming weeks.

"Wildfires have long been a fact of life in the American West," she said. "While fires may be worrisome, they do not cancel everything California has to offer its residents and visitors."

For now, a high number of stays at hotels after recent fires suggests tourism will return. Two high-end hotel companies are opening in the region. Several others are seeking permits to develop resorts.

But tourism officials in Napa and Sonoma counties know the fall has become an undependable time to visit. So they have launched campaigns to get visitors from far away to plan for the winter or spring. During those seasons, wildflowers are everywhere and the area is less busy.

Online, Visit Napa Valley is marketing its Cabernet wine season, which runs from November to April.

And for the fall season, Sonoma County Tourism wants to bring visitors from "the drive market." That is people who can make last-minute plans because they live nearby, president Claudia Vecchio said.

Some wedding planners said they expect to see shorter wedding seasons, with more happening in the spring.

"Rain is easier to deal with than fire," said Janice E. Twomey, who had about 12 weddings delayed or canceled this year.

She said people from as far away as Europe have asked her to plan their weddings for next year.

"Napa remains beautiful, the wineries are open again and people are here," said Pearson, the supervisor at Meadowood resort. "The best way people can support us is to come visit, drink the wine and have a lovely time. Just be sure to call ahead."

region – n. a part of a country (or part of the world) that is different or separate from other parts in some way

winery – n. a place where wine is made

club – n. a group of people who meet to participate in an activity, such as a hobby or sport