'The Californian's Tale,' by Mark Twain

Update Required To play the media you will need to either update your browser to a recent version or update your Flash plugin.
By VOA
27 November 2020


Editor's Note: This is a weekly multimedia series of American short stories for English language learners. Each story has video, audio, a quiz, and a lesson plan for teachers. Hope you enjoy reading and listening to this story! Please leave your questions and comments below.

Our story today is called "The Californian's Tale." It was written by Mark Twain. Here is Shep O'Neal with the story. 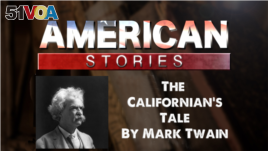 When I was young, I went looking for gold in California. I never found enough to make me rich. But I did discover a beautiful part of the country. It was called "the Stanislau." The Stanislau was like Heaven on Earth. It had bright green hills and deep forests where soft winds touched the trees.

Other men, also looking for gold, had reached the Stanislau hills of California many years before I did. They had built a town in the valley with sidewalks and stores, banks and schools. They had also built pretty little houses for their families.

At first, they found a lot of gold in the Stanislau hills. But their good luck did not last. After a few years, the gold disappeared. By the time I reached the Stanislau, all the people were gone, too.

Grass now grew in the streets. And the little houses were covered by wild rose bushes. Only the sound of insects filled the air as I walked through the empty town that summer day so long ago. Then, I realized I was not alone after all.

A man was smiling at me as he stood in front of one of the little houses. This house was not covered by wild rose bushes. A nice little garden in front of the house was full of blue and yellow flowers. White curtains hung from the windows and floated in the soft summer wind.

Still smiling, the man opened the door of his house and motioned to me. I went inside and could not believe my eyes. I had been living for weeks in rough mining camps with other gold miners. We slept on the hard ground, ate canned beans from cold metal plates and spent our days in the difficult search for gold.

Here in this little house, my spirit seemed to come to life again.

I saw a bright rug on the shining wooden floor. Pictures hung all around the room. And on little tables there were seashells, books and china vases full of flowers. A woman had made this house into a home.

The pleasure I felt in my heart must have shown on my face. The man read my thoughts. "Yes," he smiled, "it is all her work. Everything in this room has felt the touch of her hand."

One of the pictures on the wall was not hanging straight. He noticed it and went to fix it. He stepped back several times to make sure the picture was really straight. Then he gave it a gentle touch with his hand.

"She always does that," he explained to me. "It is like the finishing pat a mother gives her child's hair after she has brushed it. I have seen her fix all these things so often that I can do it just the way she does. I don't know why I do it. I just do it."

As he talked, I realized there was something in this room that he wanted me to discover. I looked around. When my eyes reached a corner of the room near the fireplace, he broke into a happy laugh and rubbed his hands together.

"That's it!" he cried out. "You have found it! I knew you would. It is her picture. I went to a little black shelf that held a small picture of the most beautiful woman I had ever seen. There was a sweetness and softness in the woman's expression that I had never seen before.

The man took the picture from my hands and stared at it. "She was nineteen on her last birthday. That was the day we were married. When you see her...oh, just wait until you meet her!"

"Oh, she is away," the man sighed, putting the picture back on the little black shelf. "She went to visit her parents. They live forty or fifty miles from here. She has been gone two weeks today."

"When will she be back?" I asked. "Well, this is Wednesday," he said slowly. "She will be back on Saturday, in the evening."

I felt a sharp sense of regret. "I am sorry, because I will be gone by then," I said.

"Gone? No! Why should you go? Don't go. She will be so sorry. You see, she likes to have people come and stay with us."

"No, I really must leave," I said firmly.

He picked up her picture and held it before my eyes. "Here," he said. "Now you tell her to her face that you could have stayed to meet her and you would not."

Something made me change my mind as I looked at the picture for a second time. I decided to stay.

The man told me his name was Henry.

That night, Henry and I talked about many different things, but mainly about her. The next day passed quietly.

Thursday evening we had a visitor. He was a big, grey-haired miner named Tom. "I just came for a few minutes to ask when she is coming home," he explained. "Is there any news?"

"Oh yes," the man replied. "I got a letter. Would you like to hear it? He took a yellowed letter out of his shirt pocket and read it to us. It was full of loving messages to him and to other people – their close friends and neighbors. When the man finished reading it, he looked at his friend. "Oh no, you are doing it again, Tom! You always cry when I read a letter from her. I'm going to tell her this time!"

"No, you must not do that, Henry," the grey-haired miner said. "I am getting old. And any little sorrow makes me cry. I really was hoping she would be here tonight."

The next day, Friday, another old miner came to visit. He asked to hear the letter. The message in it made him cry, too. "We all miss her so much," he said.

Saturday finally came. I found I was looking at my watch very often. Henry noticed this. "You don't think something has happened to her, do you?" he asked me.

I smiled and said that I was sure she was just fine. But he did not seem satisfied.

I was glad to see his two friends, Tom and Joe, coming down the road as the sun began to set. The old miners were carrying guitars. They also brought flowers and a bottle of whiskey. They put the flowers in vases and began to play some fast and lively songs on their guitars.

Henry's friends kept giving him glasses of whiskey, which they made him drink. When I reached for one of the two glasses left on the table, Tom stopped my arm. "Drop that glass and take the other one!" he whispered. He gave the remaining glass of whiskey to Henry just as the clock began to strike midnight.

Henry emptied the glass. His face grew whiter and whiter. "Boys," he said, "I am feeling sick. I want to lie down."

Henry was asleep almost before the words were out of his mouth.

In a moment, his two friends had picked him up and carried him into the bedroom. They closed the door and came back. They seemed to be getting ready to leave. So I said, "Please don't go gentlemen. She will not know me. I am a stranger to her."

They looked at each other. "His wife has been dead for nineteen years," Tom said.

"She went to see her parents about six months after she got married. On her way back, on a Saturday evening in June, when she was almost here, the Indians captured her. No one ever saw her again. Henry lost his mind. He thinks she is still alive. When June comes, he thinks she has gone on her trip to see her parents. Then he begins to wait for her to come back. He gets out that old letter. And we come around to visit so he can read it to us.

"On the Saturday night she is supposed to come home, we come here to be with him. We put a sleeping drug in his drink so he will sleep through the night. Then he is all right for another year."

Joe picked up his hat and his guitar. "We have done this every June for nineteen years," he said. "The first year there were twenty-seven of us. Now just the two of us are left." He opened the door of the pretty little house. And the two old men disappeared into the darkness of the Stanislau.

Now it's your turn to use these Words in this Story. In the Comments section, write a sentence using one of these words and we will provide feedback on the use of vocabulary and grammar.

curtain - n. a piece of cloth that hangs down from above a window and can be used to cover the window

sigh - v. to take in and let out a long, loud breath in a way that shows you are bored, disappointed, relieved, etc.

sorrow - n. a feeling of sadness or grief caused especially by the loss of someone or something