Update Required To play the media you will need to either update your browser to a recent version or update your Flash plugin.
By Bryan Lynn
18 September, 2016


Californians will vote in November on whether to stop using execution as a form of punishment, or reform the legal process leading up to the death sentence.

The state of California currently has about 750 people on death row. A lot of them were sentenced to die many years ago, but their cases are still being appealed in the courts.

Activists on both sides of the issue agree that the current system needs to be fixed. Two competing ballot measures attempt to do this.

Proposition 62 would permanently abolish the death penalty in California. If it became law, death row prisoners would have their sentences changed to life in prison with no possibility of being released.

Proposition 66 would try to speed up executions by reforming parts of the appeals process. The changes would set time limits on court appeals and make more lawyers available to dispute death penalty rulings.

Paula Mitchell is with Loyola Law School in Los Angeles, California. She says Californians have spent way too much on executions since the state brought back the death penalty in 1978.

"California taxpayers have spent $5 billion. The state has executed 13 people. Roughly 100 have died on death row before their appeals were finished or before the state could execute them."

Actor and activist Mike Farrell says the death penalty has killed innocent people. He claims it is used only against poor people and the poorly defended. "It entraps and kills the innocent. There is simply, in my view, no justice and no justification for it."

Former football player Kermit Alexander supports capital punishment. His mother, sister and two nephews were murdered in Los Angeles in 1984. But Alexander said he believes it should only be for justice, not revenge. The man found guilty of killing his family is still on death row, waiting in jail after more than 30 years.

In addition to California, 30 other American states have the death penalty. But it is rarely carried out in the United States. 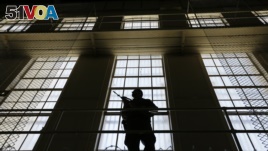 The rate of U.S. executions has fallen sharply over the past seven years. In 2009, 52 executions were carried out, according to the Washington D.C.-based Death Penalty Information Center. In 2015, there were 28 executions. This year, there have been 15.

Many government lawyers say the punishment should be kept for people who carry out the very worst crimes.

Mike Hestrin is District Attorney for Riverside County, California. "I think it is a tool that we prosecutors need, and that the justice system needs, in order to appropriately punish people that commit outrageous and heinous crimes.

Hestrin added that executions are also a way for society to express anger at the crimes committed.

Critics like Mike Farrell note that the United States is one of only a few democratic nations to keep the death penalty. "I think it corrupts the society. And I think it demeans us as people."

Californians will vote on the issue November 8.

Mike O'Sullivan reported this story for VOA News. Bryan Lynn adapted it for Learning English, with additional information coming from Associated Press and Reuters. George Grow was the editor.

We want to hear from you. What is your opinion on death sentences? Write to us in the Comments section, and visit 51VOA.COM.

death row – n. part of a prison where prisoners who will be killed as punishment for their crimes live until they are killed

entrap – v. to lure someone into doing something by deception

revenge – n. the act of doing harm to someone in order to get even

demean – v. to lower in character, status or reputation