Update Required To play the media you will need to either update your browser to a recent version or update your Flash plugin.
By Susan Shand
25 February, 2018


In a report last month, the Cambodian Rice Federation (CRF) warned the country's market for exports could be destroyed by secret or unlawful sales of rice.

The report gave a long list of problems within the organization and the rice industry as a whole. It showed the deep problems and weaknesses in an industry that occupies a central place in Cambodia's society and economy.

The CRF was founded in 2014 as part of an effort to strengthen and expand the country's rice industry. Cambodia was exporting much less rice than its neighbors Thailand and Vietnam, reports showed. 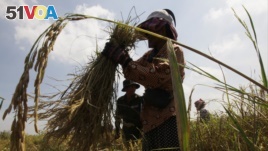 Last year, Cambodia exported about 700,000 tons of rice, a 17.3 percent increase over 2016 rice levels. Yet it exports less than Vietnam, which exported 6 million tons, and Thailand, which sold more than 11 million tons to overseas buyers over the same period.

The reasons for Cambodia's low export numbers are complex, the CRF report said. It raised concerns over a number of issues, such as price manipulation, conflicts of interest among the CRF's leadership, favoritism and mistrust.

The report also noted the issue of Vietnamese rice smuggling, which was once a taboo subject. In 2013, when the problem was discussed openly, Cambodian officials denied it existed.

But in this report, the CRF said Vietnamese smuggling was a threat to the World Trade Organization and trade rules of the Association of Southeast Asian Nations.

The report said the smuggling made it difficult to follow the rules of origin since some rice reportedly was re-exported to a third country. It warned that this could damage Cambodia's entire export market.

Rules governing origination are different from one country to the next. For Cambodia, the biggest concern would be if smuggling would lead to cancellation of its preferential trade position within the European Union (EU). Cambodia says 43.54 percent of its rice exports last year went to EU member countries.

A European Commission spokesperson told VOA that reports of wrongdoing involving a preferential market "need, of course, to be taken very seriously." The spokesperson also said that Cambodia has to be sure that "the rice exported to the EU is fully homegrown."

In 2014, the CRF established a Cambodia Code of Conduct. Its rules barred businesses from exporting low cost rice from neighboring countries. Two years later the CRF said it was tightening border controls on illegal imports. It is not clear how effective the Code of Conduct has been.

CRF deputy president Seu Rany said the CRF did not have any hard numbers on the amount of Vietnamese rice being smuggled into Cambodia but noted it remains a serious problem.

"(Those) who smuggle the rice do not tell us through which gateway they do it so it's all secret," he said.

The rice federation board is influenced by wealthy and politically connected business leaders at the top of the industry. It is led by Sok Puthyvuth, owner of the SOMA group, one of the biggest rice export companies.

Chhong Sophal is an officer with an independent national group of farmers associations called Farmer and Nature Net. He criticizes Cambodian rice farmers for lacking organization. He said the farmers were not able to establish a common price for their rice, so they often lost money.

The rice federation's report said the CRF leadership also appeared to have trouble recognizing differences between their official duties and business activities. It said the members attended meetings based on whether or not their interests would be affected. And it said they made "no clear effort to gather information about issues members are facing.

Seu Rany said change would take time. He added that the CRF is a growing organization with a lot of work expected in the years to come.

"It is best to sit down and talk out individual problems and solve them along the way," he said. That way, the farmer will survive and so will the rice millers and exporters."

David Boyle and Nem Sopheakpanha reported this story for VOANews. Susan Shand adapted the report for Learning English. George Grow was the editor.

Manipulation – n. to deal with or control by artful or unfair activities

Smuggle – v. to move (someone or something) from one country into another secretly or unlawfully

Taboo – n. not acceptable to talk about or do

Origin – n. beginning or creation of something

Preferential – adj. helping a person or group of people