Cambodia ‘Saddened’ over US Decision to Cut Aid

Update Required To play the media you will need to either update your browser to a recent version or update your Flash plugin.
By Bryan Lynn
28 February, 2018


Cambodia is criticizing the United States government for deciding to cut the amount of aid it gives the country.

The Trump administration said in a statement Tuesday it was stopping or reducing aid programs worth $8.3 million. It said the cuts were being made because of "recent setbacks in democracy" in Cambodia.

The setbacks had caused U.S. officials "deep concern," the statement said. The concern led the government "to review its assistance to Cambodia to ensure that American taxpayer funds are not being used to support anti-democratic behavior."

The cuts relate to assistance programs provided by the Treasury Department, USAID and the U.S. armed forces. 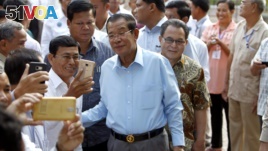 In Phnom Penh, a government spokesman said Wednesday Cambodian officials were "saddened and shocked" over the "disrespectful" decision. The official defended his country's record and promised Cambodia would "maintain and continue democracy with energy."

The U.S. announcement came days after Cambodian Senate elections in which the ruling Cambodian People's Party (CPP) claimed victory in all 58 seats.

The vote was held after thousands of opposition lawmakers and local leaders were denied voting rights. Senate seats are elected by parliament members and local officials across Cambodia.

Rights groups and members of the opposition Cambodia National Rescue Party, or CNRP, called the vote a "sham" and "undemocratic."

White House Press Secretary Sarah Sanders told reporters the elections had "failed to represent the genuine will of the Cambodian people."

Until last November, the CNRP was the only opposition party in parliament. Then, acting on a government request, Cambodia's Supreme Court ordered the party dissolved. The high court also barred its members from holding office in the future.

Cambodia has been led for more than 30 years by Hun Sen, who currently serves as prime minister. Political observers say they think general elections planned for July will extend the rule of his Cambodian People's Party.

Kem Sokha, the leader of the CNRP, was arrested in September. He is accused of trying to overthrow the government with U.S. support. He remains jailed on treason charges. U.S. officials and rights groups have criticized the Cambodian government actions as part of a larger effort to crush political opposition and independent media.

In a report, Cambodia's main media watchdog group said a "façade of media freedom" collapsed in the country in 2017.

The Cambodian Center for Independent Media spoke with more than 70 local journalists working in Cambodia. They came from both pro-government and more independent media organizations. The center says the study was carried out anonymously.

As one example, the report noted the closures of 32 radio stations that produced broadcasts often critical of the government. It said the government had also forced other often-critical media organizations to suspend operations because of tax investigations.

One of them is the Cambodia Daily newspaper, which was ordered closed over a disputed tax bill.

Radio Free Asia suspended its Cambodia operations last year, noting threats and a dispute over its tax situation. Radio Free Asia and VOA are each part of the U.S. government-supported Broadcasting Board of Governors.

Bryan Lynn wrote this story for VOA Learning English. His story was based on reports from VOANews, Radio Free Asia, the Associated Press and Reuters. George Grow was the editor.

ensure – v. make sure something is done or happens

fund – n. an amount of money set aside for a special purpose

review – v. to examine or study

sham – n. something that is not what it appears to be and that is meant to trick or people

genuine – adj. real; not a copy or reproduced

façade – n. a way of behaving or appearing that gives other people a false idea of your true feelings or situation

journalist – n. someone who writes or reports a study for a media company

anonymously – adv. not named or identified