Update Required To play the media you will need to either update your browser to a recent version or update your Flash plugin.
By VOA
19 June, 2014

Thousands of migrant workers have fled to Cambodia from Thailand. Many fear that Thai's new military government will take steps against illegal workers. But as we hear from Anna Mateo, the government has denied ordering the expulsion of workers.


Eye-witnesses describe areas along the Thai-Cambodian border as disorderly and chaotic. Tens of thousands of undocumented Cambodian workers have been going home. Some say they heard unconfirmed reports of the use of force against illegal labor by Thailand's military government. 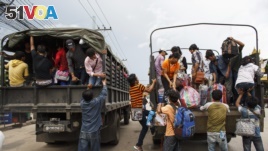 Cambodian workers ride on military trucks as they prepare to cross the Thai-Cambodia border.
Border security was tightened after the Thai armed forces ousted the civilian government on May 22nd. The military coup caused some migrant workers to leave Thailand. But in recent days the numbers have risen sharply. 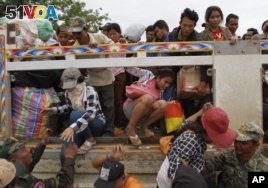 Cambodian migrant workers get off a Thai truck upon their arrival from Thailand at a Cambodia-Thailand's international border gate in Poipet, Cambodia, June 17, 2014.
Joe Lowry works for the International Organization for Migration. He says border stations are overcrowded.

"About 75,000 people would have crossed over from Thailand - undocumented Cambodian workers. They are coming from different parts of Thailand, being at the border and then being taken to their home provinces by a combination of Army and military trucks, mini-buses that we're hiring to get the most urgent cases homes. It has been a chaotic scene on the border for the last 48 hours and it might continue for quite some time." 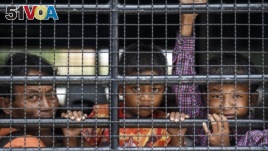 Cambodian migrants on a truck as they wait to cross the Thai-Cambodia border.
Since the coup, Thai police and officials are reported to have raided some migrant neighborhoods. They reportedly asked migrant workers to present identification cards.

Last Sunday, the Thai military and Foreign Ministry denied there are plans to punish migrant workers. A military government official says the administration is taking steps to control migrant labor because of concerns over human trafficking and child labor. 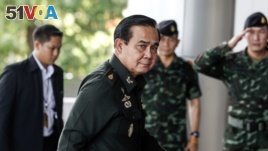 Thai Army chief General Prayuth Chan-Ocha arrives for a meeting to discuss Thailand's 2015 national budget, June 13, 2014.
General Prayuth Chan-o-cha is the head of the military government. He recently called for better workforce rules. He also said that warning illegal workers about their standing led to fears of a crackdown.

In recent years, the International Labor Organization has supported a program set up to regularize Thailand's undocumented labor. The program created a system of work permits and national passports for migrant workers.

"They've come out with this commission saying that they are setting up this commission to address migration issues. I mean I think it is a good thing because migration as a policy in Thailand has been absolutely chaotic. Hundreds of thousands of migrants have been left with without any policy."

Thailand's National Health Commission Office estimates there are as many as four million migrant workers in the country. At least 400,000 were from Cambodia and more than two million from Myanmar. Smaller numbers are from Laos. These migrants work in Thailand's industry, agriculture and fishing sectors -- areas often avoided by Thai nationals.