The top education official in Cambodia is praising efforts to prevent final-year high school students from cheating on their exams. Minister of Education Hang Chuon Naron says he is sure the results will be better this year than they were for the class of 2014.

Many high school students are hoping the same thing. Last year, 60 percent of students failed after the government launched the "no-cheating" policy.

Cambodia's 88,000 final-year high school students took their exams last month. Many are afraid the government's "no-cheating" policy may hurt their chances of entering a university. 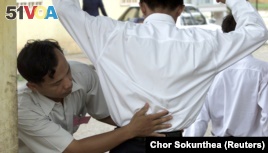 In this file photo, a Cambodian school security official searches a student for exam 'cheat sheets' at the gates of a school in Phnom Penh. (REUTERS/Chor Sokunthea)

Some students prayed for success. One unhappy student told a Phnom Penh newspaper she hoped people watching the testing would let the student cheat "in a small way, like reading each other's answers." But her hopes did not come true. The "no-cheating" policy was firmly enforced.

As usual, some students tried to cheat on the exams. A few students were caught with hand-written notes to help aid their memory. One Grade 11 student was arrested after he tried to take the exam for his older brother.

For the most part, it seems, the new rules stopped the cheating that has taken place for years during exams in Cambodia.

Hang Chon Naron is the person responsible for the "no-cheating" policy. It is an important part of his efforts to reform education. His goal is to replace the old system – which supported cheating – with a culture of merit that helps those who work hard.

The education minister started in his current job two years ago. He thinks the pass rate will be higher this year, partly because students have studied more. Other changes also have helped, including improved teacher training and extra classes.

"We have seen the change in student attitudes – especially we got a report from the schools that they worked harder, they attended the additional classes on Saturday and Sunday that [were] offered by the teachers."

The minister hopes that honesty in exam-taking will begin correcting the biggest problem facing the education system: high school graduates who are not ready to fill jobs. The system has long produced graduates who lack the skills that employers need.

"Indeed, you know, we still have insufficiency because for one year working is not enough, because for some subject matter it takes a few years at least – two or three years. But we will see more progress this year compared to last year, and I believe that it is a change of mentality from the students. And it sets new habits."

Other changes include better training for teachers, increasing their pay and making improvements to school buildings. Other programs are aimed at improving education for women. As we reported in January, the Asian Development Bank and other donors are providing the money to help improve Cambodia's education system.

Fixing the problems in the education system will not be easy, says the minister. But he thinks it was good to start by ending cheating on exams. That policy not only shows weaknesses in the system, he says. It also forces students to learn.

"All that spending – like spending on textbooks, spending on more resources, even higher salaries of teachers – if the students don't learn then you cannot have [success with] that."

As for the Class of 2015, it seems most students took the new no-cheating policy seriously. They spent extra hours preparing for the exams. They will soon find out whether those efforts helped. A report on the test results is to be released in the middle of September.

Robert Carmichael reported this story from Phnom Penh. Jill Robbins adapted his report for Learning English with additional information from UNESCO. George Grow was the editor.

merit – n. a good quality or feature that deserves to be praised

insufficiency – adj. not having or providing enough of what is needed

Now it's your turn. Is cheating on exams common where you live? What do you think is the result of cheating? Write to us in the comments section.