Update Required To play the media you will need to either update your browser to a recent version or update your Flash plugin.
By John Russell
28 September 2021


Cambodian students have designed a prototype drone that they hope can eventually be used to move people around Phnom Penh and even help fight fires.

The drone was developed by students at the National Polytechnic Institute of Cambodia (NPIC), a college in the capital city.

The drone has eight propellers and uses a school chair for the pilot's seat.

"The drone, when we see it flying without a pilot, there is a lot of shaking, but when I sit on it and fly... it becomes more stable and I feel so excited," he said.

Excited is a term that means very happy or enthusiastic about something. 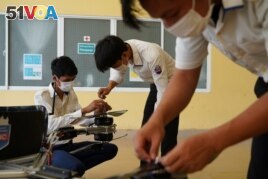 Vannsith added that the group of students "wanted to solve some problems for our society by making a taxi drone and... inventing drones for firefighters." He explained that the drone could reach the upper floors of a building to bring a hose if a fire truck could not reach the area.

The prototype can carry a pilot weighing up to 60 kilograms and fly for about 10 minutes for a distance of 1 kilometer. It took three years of research and development, and it cost around $20,000 to build.

The drone currently only rises as much as 4 meters, but the team hopes it will eventually fly far higher.

The project faced delays because of coronavirus restrictions.

Parts for the drone had to be purchased from abroad, said Sarin Sereyvatha. He is NPIC's head of research and development technology.

The team plans to improve the design to permit it to take more weight and fly farther and higher.

"In principle, if we make one drone, the cost is expensive but if we make them to sell on the market, the cost will go down," said Sarin Sereyvatha.

Prak Chan Thul reported on this story for Reuters. John Russell adapted it for Learning English. Susan Shand was the editor.

prototype – n. an original or first model of something from which others are copied or developed

propeller – n. a device with two or more blades that turn quickly and cause a ship or aircraft to move

shake – v. to move sometimes violently back and forth or up and down with short, quick movements

hose – n. a long, usually rubber tube that liquids or gases can flow through

principle – n. a basic truth or theory, an idea that forms the basis of something