Update Required To play the media you will need to either update your browser to a recent version or update your Flash plugin.
By Dan Friedell
13 May, 2017


Cambodia's Ministry of Agriculture, Forestry and Fisheries has ordered workers to stop all illegal destruction of forests and timber trafficking activities.

Radio Free Asia (RFA) says the government order was dated May 8 and publicly released the following day. It said the ministry has taken note of the existence of forest and land-clearing, as well as the seizure of forest land for private ownership.

RFA said the order appears to be in reaction to a report from the Environmental Investigation Agency (EIA). The London-based group released the report on April 8. 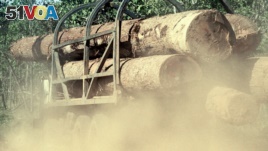 FILE - In this July 2002 file photo, dust flows from under the truck loaded with logs as it makes its way on a rural road in Preah Vihear province, north of Phnom Penh, Cambodia. An environmental watchdog has accused Vietnamese government and military officials of taking payoffs to ignore vast smuggling of lucrative lumber from neighboring Cambodia.

The group described a major tree-clearing operation and timber export business in Cambodia. It said corrupt Cambodian government officials and Vietnamese companies started the business last year in the northeastern province of Ratanakiri.

The EIA report accuses corrupt officials and members of Vietnam's armed forces of removing large numbers of illegally cut trees from Cambodia. It noted their removal violates Cambodia's ban on timber exports to Vietnam. The Cambodian government has banned such exports for over 30 years.

The report is called "Repeat Offender: Vietnam's Persistent Trade in Illegal Timber." It estimates that over 300,000 cubic meters of hardwood logs have been taken from Cambodia's national parks and shipped to Vietnam.

The EIA says timber smugglers are paying bribes to border agents in both countries. In return, the agents permit shipment of the trees to Vietnam.

The report said more than $13 million in unlawful payments have been made to Cambodian officials since last November.

Ouch Leng is an investigative reporter and activist. He has reported on illegal logging operations and corruption in Cambodia's Prey Lang Forest. He won the 2016 Goldman Environmental Prize for his reporting.

He said it is a good thing for the Cambodian government to be concerned about illegal timber trade. But he does not think the government will be able to stop it.

"That's because the people who are involved in the illegal logging business are members of the government or the armed forces," he said.

Seng Sok Heng is another critic of the Cambodian government. He said he thinks some law enforcement agents will continue accepting money and permit the smuggling to continue.

He's said, "It's too little, too late now. Such action should have been taken much earlier."

Radio Free Asia and the Associated Press reported on this story. Dan Friedell adapted the story for Learning English. George Grow was the editor.

What do you think about the illegal logging? We want to know. Write to us in the Comments Section or on 51VOA.COM.

smuggle – v. something valuable (such as money) that is given in order to get someone to do something

offend – v. to cause (a person or group) to feel hurt, angry, or upset by something said or done

log – v. to cut down trees in an area for wood