Update Required To play the media you will need to either update your browser to a recent version or update your Flash plugin.
By Mario Ritter
08 September, 2017


Cambodian groups are asking the government to stop the controlled flooding of their villages as a hydroelectric dam goes into operation.

The floodgates of the Lower Se San 2 hydropower dam are being closed and water levels are rising in Stung Treng province. In time, many villages will be under water.

The villages are in eastern Cambodia near a river that flows into the Mekong, one of Southeast Asia's longest rivers.

Some villagers unhappy with relocation

Government officials have urged people living in the area to move to new homes set up for them.

Many people have already accepted compensation plans. But, about 143 families remain. They say they stay where they have lived for generations. They also argue they want to remain near the burial places of their ancestors.

The villagers have called on Prime Minister Hun Sen and the Ministry of the Interior to help them.

A group from the village of Kbal Romeas and an ethnic minority recently met with an official of Cambodia's interior ministry in Phnom Penh.

The group said they did not want to leave their homes. Instead, they wanted the government to give them official recognition of their ownership of the land.

"If we do something wrong, we pray in accordance with our traditions," he said. "And we pray so that we can be recovered."

He used to be a fisherman. But many people in the area say fish catches have decreased on the river.

He said he is doing well.

"Before I could not transport any goods. Now I can. The truck can get into our home to transport goods. Whatever I need, they can reach my home."

But not everyone from the flooding villages is happy about having to move.

"I really don't want to live there. The situation is difficult, there's not enough water. It's mountain land and it's rock and sandy and very difficult to do agriculture," he said.

Yun Lorang is a secretary-coordinator for the Cambodian Indigenous People's Alliance. He is one of several activists who has been calling on native, or indigenous, people to reject compensation and fight relocation efforts.

He said relocation will result in the death of native ways of life and their connection with the land. 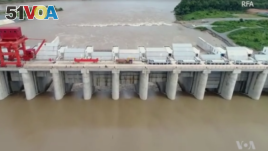 The Se San 2 dam is on a river that flows into the Mekong River, one of Southeast Asia's largest rivers.

The dam is estimated to have cost more than $800 million. It is to be Cambodia's biggest dam producing 400 megawatts of electricity.

However, the dam will flood 335 square kilometers and with it the way of life of many native people.

Environmentalists argue that the dam will affect the local fishing industry.

A report published in the Proceedings of the National Academy of Sciences in 2012 warns of a drop in fish stocks. It says the Mekong River will lose more than nine percent of its fisheries because of the Lower Se San 2 dam.

An environmental study sought by the developer of the dam and approved by Cambodia's government also found problems. In 2010, it said that fish populations would be severely hurt because the dam would block migratory species of fish.

A debate continues over whether the economic gains and electricity produced by the dam will be greater than the loss of fish and water.

The Ministry of Mines and Energy has not answered requests for comments about the project.

Cambodia's energy needs are increasing quickly. The dam is supposed to provide electricity for five Cambodian provinces. The project is a joint effort by Cambodian, Chinese and Vietnamese companies.

David Boyle reported this story for VOA News. Mario Ritter adapted it for VOA Learning English with additional material from RFA. Caty Weaver was the editor.

relocate –v. to be moved to a new place