Update Required To play the media you will need to either update your browser to a recent version or update your Flash plugin.
By Phil Dierking
06 December, 2016


The government in Cameroon says its security forces did not abuse protesters during demonstrations in two areas last month.

Students, teachers, and lawyers in English-speaking parts of the country were protesting the influence of the French language.

A government official told VOA that Cameroon's military acted with restraint during the demonstrations, and showed respect for international rules on human rights.

Government spokesman Issa Tchiroma said the government is investigating the protests and the actions of military officers. He noted that if the government finds evidence of wrongdoing, it will take corrective action to punish the violators. He also said that Cameroon will not accept any attempts to ruin the country's hard-earned national unity.

The spokesman said he was reacting to a statement by the United States. He said the State Department released the statement on November 28. 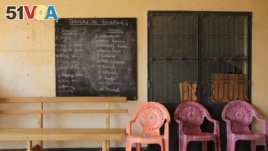 A blackboard with translations of French phrases into the Kanuri language is seen at a Cameroonian military base in Kolofata, Cameroon.

The State Department expressed concern about the deaths, injuries and damage that resulted from protests in the capitals of Cameroon's Northwestern and Southwestern regions.

U.S. ambassador Michael Hoza expressed concerns over the violence. He met with Cameroon's president Paul Biya and explained that the United States respects Cameroon's history of acceptance of diversity.

"...And both President Biya and I agreed that dialogue is the future for Cameroon. We know that there will be discussions and we are certain that Cameroon's people will find solutions and be able to live together in tolerance as they have for many, many years."

However the protesters say the two languages are not treated equally.

Teachers have said that the government continues to send teachers that only speak French to English-speaking parts of the country. Some students in those areas are worried that they will not be able to get good jobs after they finish school.

How do you feel education can influence children? We want to hear from you. Write to us in the Comments Section or on 51VOA.COM.

solutions – n. something that solves a problem