Update Required To play the media you will need to either update your browser to a recent version or update your Flash plugin.
By VOA
19 October, 2014


From VOA Learning English, this is the Technology Report.

Cameroon is experimenting with Africa's first mobile system to send a cardiac, or heart signal over a wireless network. The system will give much needed medical assistance to heart patients in rural areas. Cameroonian Arthur Zang invented the device called the Cardiopad. He was just 24 years old when he invented it.

The Cardiopad is a touch screen medical tablet that enables heart examinations to be performed. The results of the tests are sent wirelessly to specialists in other parts of Cameroon who can interpret them.

Simplice Momo is a 55-year-old heart patient in a rural area of Cameroon. He says the Cardiopad saves him time and money. He says it is too costly and difficult for him to see a heart specialist in the city. 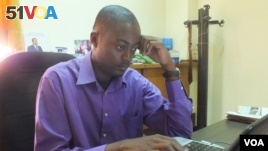 Cameroon has a population of about 22 million people. But the country only has 40 heart surgeons. Most are in the cities of Douala or Yaounde. Sometimes the heart experts needed can only be found outside the country.

Apolonia Budzee is a nurse at Saint Elizabeth Cardiac Center. She says the device will permit doctors to send patients' medical information to specialists in Europe.

Arthur Zang started the Cardiopad project five years ago. The young computer engineer said he needed more training and $45,000 to develop the device. His family did not have the money. Banks would not give him loans. So he shared his idea on social media. The president of Cameroon, Paul Biya, answered the appeal with money for the project. Mr. Zang also received free online training from an engineering school in India.

The Cameroon scientific community has recognized the Cardiopad as extremely effective. The device costs about $4,000. The government of Cameroon has not been able to provide the device to hospitals in need. Most of them lack internet and enough electricity. But the Cardiopad testing at the Bafia Hospital is gaining attention and may get the assistance needed.

Mr. Zang says he has had private investors contact him. But he is more interested in investors who share his vision. That vision is not of money, but of better ways to help improve people's lives.

appeal – n. a serious request for help or support

cardiac – adj. of or relating to the heart (For example: She went into cardiac arrest, meaning, her heart stopped beating.)

investors – n. people who use their money to buy a product or stock in a company in order to make a future profit

specialists – n. doctors who deal with health problems that relate to a specific area of medicine