Update Required To play the media you will need to either update your browser to a recent version or update your Flash plugin.
By John Russell
15 May, 2017


News reporters in Cameroon say they are having problems doing their work because of government restrictions on the press.

They say the restrictions have affected their reports about a strike in English-speaking areas and fighting with Boko Haram militants.

Eight journalists have been arrested in connection with their stories about the strike in English-speaking areas. The protest started in November. 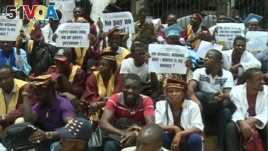 In March, the National Communication Council, or NCC, suspended another 18 reporters and media organizations.

The NCC said they failed to respect norms and ethics for professional journalists.

Some of those suspended had published reports critical of government actions to deal with the strike. Others had reported on concerns over the return of Nigerian refugees displaced by Boko Haram fighters.

Peter Essoka is president of the NCC. He told VOA that journalists must report news in a responsible way. "If you don't respect what is supposed to guide a nation, there is chaos," he said. "Do you allow for chaos because you are talking about freedom? No."

Journalists say freedom of the press is at risk

Journalists in Cameroon say press freedom is at risk.

Kini Nsom works for the Cameroon Post newspaper in Yaounde, the capital. He criticized an April 23rd warning from the NCC. It said that the media should not report on demands for secession or a return to federalism.

"We know that a newspaper is a marketplace of ideas," Nsom said. "We can talk about federalism, not necessarily promote it... When you slam a ban a topic like that, you cannot say the press is free in Cameroon," he added.

Eugene Nforngwa is the editor-in-chief of the Standard Tribune. He says the government restrictions have had a bad effect on the country's journalists.

"For instance, we have criminal libel which is like a permanent axe over the head of a journalist, which means that the simple fact that you can go to jail for doing journalism is a deterrent to free work. And so you find that a lot of journalists have gone into self-censorship."

Officials have arrested journalists under a 2014 anti-terrorism law and the revised penal code of 2016.

Issa Tchiroma is Cameroon's minister of communication and a government spokesperson. He says all arrested journalists will get a fair trial. He added that some of the journalists were arrested for reasons other than their work.

"I am mostly thinking of those who are accused of threats to public security, national integrity or being accomplices with terrorist activities. For each of these cases, they were brought before competent courts which rule in all freedom and all independence."

Some journalists in Cameroon have started wearing black as a silent form of protest. Two media rights groups, Freedom House and Reporters Without Borders, each downgraded the country's rating in press freedom studies released last month.

ethics – n. rules of behavior based on ideas about what is morally good and bad

secession – n. the act of separating from a nation or state and becoming independent

promote – v. to move up, from one level to another

libel – n. the act of publishing a false statement that causes people to have a bad opinion of someone

deterrent – n. something that makes someone decide not to do something

censorship – n. the custom of examining writings and taking out things considered offensive or bad