Update Required To play the media you will need to either update your browser to a recent version or update your Flash plugin.
By VOA
06 December 2021 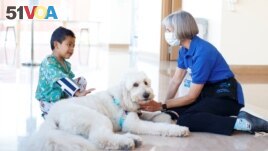 Kristin Gist and her dog Ollie are with patient Ricardo Martin, 6, at Rady Children's Hospital in San Diego, California November, 11, 2021. The hospital has eased some of its COVID-19 restrictions. (REUTERS/Mike Blake)

In the United States, these treatments are popular, although there is a lack of evidence to show that they work.

There are, however, many stories about animal therapy helping people. For example, some children have a fear of injections. That may make getting the COVID-19 vaccine a difficult experience.

So, some hospitals use therapy animals -- like Ollie, a six-year-old therapy dog. Ollie is helping children at Rady Children's Hospital in San Diego, California overcome their fear of vaccine shots.

One of those children is nine-year-old Avery Smith. At the children's hospital, she cried over her fear of the vaccine. Then. Ollie came in and sat at her feet. Avery told a Reuters reporter about her experience.

"It helped me because I never had a COVID vaccine before," said Avery. She added, "I didn't know what it felt like. But when I saw the dog it helped me calm down."

Early in November, children in the United States aged five to 11 were able to get the vaccine. Ever since then, Ollie and 14 other dogs have been helping them get vaccinated at the California hospital. They are part of a therapy program paid for by a pet supply company.

Even before the vaccine, therapy dogs were already being used at the children's hospital. Some children at the hospital are fighting cancer or other serious diseases.

Kristin Gist is a 75-year-old dog therapy volunteer and a former hospital programs director. She is also Ollie's owner. Gist said parents will sometimes hold the dog and seem to feel better too.

However, some experts say there is a lack of scientific evidence proving that animal therapy improves a patient's medical condition.

One such expert is Hal Herzog. He is a professor of psychology at Western Carolina University. He has been studying the relations between humans and animals for more than 20 years.

Herzog told VOA that an animal can distract a patient. Other things, he added, such a favorite toy might have the same effect.

"Some studies have shown that for short-term preventing pain -- interacting with a dog can put your mind on something else. And in that case, I see no harm in doing it. And for some kids it's probably going to be effective."

However, Herzog criticized the use of animals as a medical treatment, like a drug. He said research does not show that animal therapy is effective.

"There's been tons of research, but most of it is not very good. And some studies have found...some of the better studies have found that therapy dogs did not really have any impact on kids and adults that were put in stressful, experimental situations."

Herzog said the poor research methods come in many forms.

Many studies do not use a control group. A control group helps scientists understand if an experimental treatment has any effect. Some studies do not consider the effects of the dog handlers. They are often nice people and could also be helping the patient.

People involved in animal therapy research, Herzog said, often believe in it. So, their personal opinions may affect the research.

Herzog also talked about something called the "file drawer" problem. This is when a researcher does not get the results they want and put the findings into a "file drawer," or a place they do not look often.

Sometimes, he said, there is a conflict of interest. Many studies on the healthy impacts of pet ownership and animal therapy are paid for by the pet industry.

However, Herzog said even when those studies find a lack of proof, some in the media still report on the findings in a good way. Herzog said the media often reports on such studies incorrectly.

Herzog wrote about one of the best studies on dog therapy. He explained that the study was carried out at five big American hospitals. It looked at the effects of therapy dogs on children with cancer. The study found no clear benefit from the therapy dogs. The media, however, reported that the study did find benefits.

As a result, people might think animal therapy affects long-term human health more than it does. Herzog has published reports on this subject in the magazine Psychology Today.

Herzog said he is not against the use of animals in therapy. He shares a story of his own son, a nurse in a hospital's critical care area. That hospital also brings in animals to help, not the patients, but the hospital workers. His son says everyone loves the visits.

However, Herzog thinks differently about the long-term effects of using animals as a medical treatment.

"It seems to me that if we're going to push dogs, animals as medicine that we should hold them to the same standard as we do drugs."

For some people, even if there is not proof, the smiles and happy distraction may be enough. Last year, when hospitals put COVID-19 restrictions in place, the dog visits at Rady Children's Hospital stopped. They restarted in August 2021.

"There was nothing. It was silent. The kids were bored," said Carlos Delgado, a spokesperson for the hospital. "So, thank God," he told Reuters, "We were able to start bringing the program back."

Delgado added that even a short three-minute visit with a dog makes a difference in the day of a patient.

For this story, Anna Matteo interviewed Hal Herzog for VOA Learning English and Daniel Trotta reported from the California hospital for Reuters News Agency. Mario Ritter, Jr. was the editor.

therapy – n. the treatment of physical or mental sickness

interact – v. to talk to or do things with other people

stressful – adj. to cause worries or tensions

standards – n. (pl.) a group of requirements that are expected to be met

impact – n. to influence or have an effect on something

bored – adj. to be tired and unhappy about something uninteresting or repetitive