Update Required To play the media you will need to either update your browser to a recent version or update your Flash plugin.
By Jonathan Evans
10 September, 2014


The Internet is one of the most popular forms of technology. But can using the Internet have the same effect as taking a drug? The answer seems to be "Yes" in at least one country. China says many teenagers are Internet addicts. It says they have grown dependent on the Internet. In fact, China feels that Internet addiction is the biggest threat to its teenagers. Some critics even call the Internet, ‘electronic heroin.'

In 2008, China became one of the first countries to declare Internet addiction an official medical condition. Experts released a report that defined the condition, or disorder. It said people with Internet Addiction Disorder spend more than six hours online doing something other than work or study. Based on the definition, China has over 20 million Internet addicts. The condition has led to the creation of over 250 camps within China. They are designed to treat young addicts.

The first addiction camp opened in 2005 in the capital, Beijing. The camps treat the country's young addicts for their dependence on the Internet and video gaming. Gaming appears to be the most addictive Internet behavior.

Teenagers can spend three to four months at a camp. Once there, the patients are required to do demanding physical exercises and take medication. Some patients reportedly are placed in rooms by themselves for up to 10 days.

Eric Harwit is a professor of Asian Studies at the University of Hawaii. Professor Harwit says Chinese parents are worried because they take education very seriously. He says they saw a lot of teenagers start to lose interest in school and spend their time playing games on the Internet. He adds that the parents of Internet-addicted teens want to cure their children. Some even drug their children to take them to the camps. 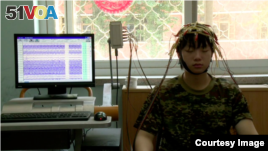 Shosh Shlam and Hilla Medalia are filmmakers from Israel. They released a documentary called Web Junkie last month. It tells about the Internet addiction camps. Their film was produced at the Daxing treatment center in Beijing.

Hilla Medalia says there are no showers at the camp. The teenagers wake up very early in the morning. She says it is like the addicts are doing military training.

But Ms. Medalia says camp officials believe conditions like these provide a discipline, or sense of self-control, that the patients need. The center urges parents to stay at the camps.

Officials at the Daxing treatment center said that 70 percent of their patients overcame Internet addiction.

Eric Harwit says once the teenage patients leave the camp, they are not supposed to play games. But they still have to use the Internet. He says a lot of research is now done online. He wonders how anyone can say that part of the Internet is good, but another part is bad.

China is not the only country dealing with Internet addiction. South Korea has opened over 100 treatment centers for teenagers suffering from the effects of ‘electronic heroin.'