Update Required To play the media you will need to either update your browser to a recent version or update your Flash plugin.
By Bryan Lynn
25 July, 2018

One of them took place in February at Marjory Stoneman Douglas High School in Parkland, Florida. The attack, carried out by former student Nikolas Cruz, killed 17 people.

The killings set in motion a nationwide debate over school security and gun control. Many security proposals have been discussed, including the hiring of armed guards and putting metal detectors in schools.

The principal of Marjory Stoneman Douglas High School, Ty Thompson, recently tweeted about new security measures that will take effect during the new school year beginning next month. Among the changes will be adding four security officers, the addition of metal detectors and numerous new cameras.

Some American schools plan to take camera technology a step further by adding facial recognition equipment to improve security. Such systems work by continuously searching faces for the identities of individuals whose images have already been entered.

The Lockport City School District in western New York state has approved a facial recognition system at all its schools. District officials say the equipment will soon be in place to identify former students and employees, sex offenders and weapons. Schools in other states have also considered using the technology.

A security expert who worked with Lockport officials says such a system can prevent shootings like the one in Parkland, Florida. "This would have identified (Nikolas Cruz) as not being able to be in that building," Tony Olivo told the Associated Press. Olivo said cameras placed throughout the school would have followed Cruz's every move on school grounds.

The system chosen by Lockport administrators was created by Canadian-based SN Technologies. The company's website says the facial recognition system can notify officials immediately when certain individuals are detected on school property. It is also designed to identify the most commonly used firearms.

Lockport's director of technology is Robert LiPuma. He told the Associated Press that past violence has forced officials nationwide to decide what new security methods are needed. He said he hopes the district's system will become a model for other schools. 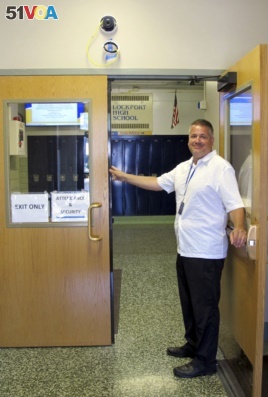 In this July 10, 2018 photo, District technology director Robert LiPuma stands in a doorway beneath a camera with facial recognition capabilities that is being installed in Lockport High School in Lockport, N.Y. (AP Photo/Carolyn Thompson)

A U.S.-based company recently announced it will start offering a free version of its facial recognition system to schools in the United States and Canada. The SAFR system by RealNetworks is also designed to keep people identified as possible threats from entering schools. Also, the system lets parents or others register their image so they can gain electronic entry to the school.

Some critics of facial recognition technology say it should be kept out of schools. The New York Civil Liberties Union (NYCLU) has asked the state Education Department to block the technology from any New York school. Education officials have said they would review the group's request.

In its letter to state officials, the NYCLU said the system will harm, not help students. "Rather than protecting them, the district is treating every child as a threat. Rather than human relationships, the district is relying on machines to do its job," the letter said.

The Electronic Frontier Foundation, a digital rights group, has called on schools considering facial recognition to carefully examine how the systems will be used. It said officials must consider who will have access to collected information, how the system would be managed and whether students can decide not to take part. 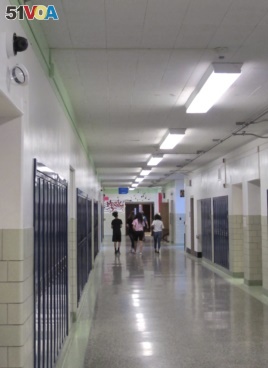 In this July 10, 2018 photo, students walk down a hallway at Lockport High School in Lockport, N.Y. On the upper left a camera with facial recognition capabilities hangs on the wall waiting for its installation to be completed. (AP Photo/Carolyn Thompson)

Khari Demos is a father with two children attending Lockport High School. He said he thinks facial recognition can be an effective tool when used as part of a complete security package to keep students safe.

"It'll actually identify who should and shouldn't be in the school," Demos said. "The system will never be 100 percent perfect, but it's a step in the right direction," he added.

Bryan Lynn wrote this story for VOA Learning English, based on reports from the Associated Press and other online sources. Hai Do was the editor.

detector – n. piece of equipment used to discover something, especially something that is hidden

principal – n. the person in charge of a school

access – n. way of being able to use or get something