Update Required To play the media you will need to either update your browser to a recent version or update your Flash plugin.
By VOA
26 February, 2013

A new study found that women who took folic acid supplements in early pregnancy were less likely to have a child with autism. Folic acid is a B vitamin that helps the body build and repair cells. The study did not prove that folic acid can prevent childhood autism, but the findings suggest a connection. The researchers called for examining whether folic acid is associated with a reduced risk of other brain disorders in children.

Children with autism have problems communicating and socializing with other people. 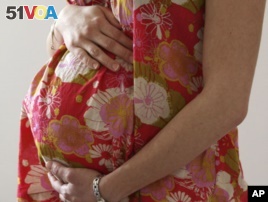 A woman holds her stomach during the last stages of her pregnancy in Bordeaux, France, April 28, 2010.
Researchers at the Norwegian Institute of Public Health looked at records of more 85,000 children born between 2002 and 2008.

The study asked mothers to describe their diets, including vitamins and other nutritional treatments, before and during their pregnancies.

Research leader Pal Suren and his colleagues compared the women who took folic acid supplements to those who did not.

"The women who took folic acid supplements in early pregnancy had a substantial reduction in risk of having a child with autism. The reduction was 40 percent."

He says the best time to take folic acid to reduce the risk of autism seems to be from four weeks before to eight weeks after the start of pregnancy. The researchers found that taking folic acid halfway through pregnancy had no effect.

After the babies were born, investigators followed up with the children through the end of March 2012. They wanted to find out how many developed any form of autism. Two hundred seventy of the children had some form of autism. The study found no reduction in the risk of some forms of autism. But it did find a lower risk for the most severe form. There were not enough children with a milder form known as Asperger's syndrome to make any findings.

The cause of autism is not known, but several genes may play a part.

Folic acid has been linked to the development of a protective covering called the neural tube in a fetus. Women who do not get enough folic acid are at risk of giving birth to infants with part of their spinal cord or brain exposed. This disabling condition is called spina bifida.

Ezra Susser of Columbia University in New York City was a co-author of the new study of folic acid.

"These supplements are already recommended for other reasons. So this increases the reasons why we should recommend them."

Studies have shown that many pregnant women get less folate in their diet than they need to prevent neural tube defects. So folic acid supplements are commonly recommended for pregnant women. Some countries add folic acid to flour. Norway does not do that.

The study appears in the Journal of the American Medical Association.
Related Articles
go top