Update Required To play the media you will need to either update your browser to a recent version or update your Flash plugin.
By Bryan Lynn
13 March, 2017


North Korea has been developing missiles and expanding its nuclear program for many years. But recently, North Korea has greatly increased production and testing of weapons, leading many security experts to urge immediate action to stop it.

The latest test came on March 6, when North Korea launched four missiles. They came down in waters off Japan's northwest coast.

In recent months, North Korea has tested a number of missiles, including a new medium-range missile in February. It also carried out two nuclear tests last year.

The most recent tests came as the United States and South Korea launched joint military exercises. U.S. officials described the exercises as a series of joint and combined ground, air, naval and special operations field training. North Korea has called them a rehearsal for an invasion by enemies. 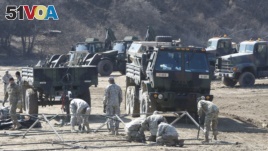 "Each missile test does give North Korea more knowledge and it contributes to North Korea's quest eventually to be able to have a nuclear armed missile that could hit the United States."

He adds the continued testing clearly shows that reaching the U.S. mainland with a nuclear missile is a goal of North Korean leader Kim Jong Un.

Fitzpatrick and other experts believe that in as little as four years, North Korea could have a long-range missile armed with a nuclear warhead.

"The accelerated pace of North Korea's testing over the last few years is certainly a cause for concern. Last year there were 24 missile tests and this year is off to the races, with five missiles launched to date."

The latest tests did not involve long-range missiles equipped to reach U.S. territory. The four rockets were identified as extended-range Scud missiles, each with an estimated range up to 1,000 kilometers.

The Soviet Union developed Scud missiles during the last century at a time of tense relations with the United States and the West. They were modernized versions of rockets built by Germany during World War II.

Fitzpatrick said North Korea's recent tests did not provide evidence of a major development in Scud missile technology. But he added that even if the missiles are older, the international community should still be concerned about the tests. These shorter-range missiles can easily strike targets in South Korea and Japan.

Long-range rockets capable of reaching the United States are called intercontinental ballistic missiles. North Korea is currently thought to be developing several of these ICBMs. Some are said to have a range of up to 10,000 kilometers.

At the same time, North Korea is moving forward with nuclear development to arm its missiles. Recent satellite images have shown signs that North Korea was preparing to restart production of plutonium at its main nuclear center.

Plutonium can be used to produce nuclear arms. North Korea is also thought to have produced highly enriched uranium for its nuclear weapons.

Fitzpatrick said he believes this will happen one day, given North Korea's continued engineering and technological development.

He added that North Korea has also taken steps to improve its methods for launching and deploying missiles. During the past year, it showed a new capability to fire missiles from vehicles with treads similar to those on tanks. This gives these launch vehicles the ability to travel off main roads to places not as easily found by surveillance.

Recent tests have shown North Korea has also begun using solid fuel motors in missiles. Fitzpatrick says such missiles can be filled and launched much faster than rockets powered by liquid fuel.

"The combination of solid-fueled missiles and tread-tracked vehicles going off road makes the detection and preemption option far more difficult."

Fitzpatrick says North Korea's missile and nuclear development should be "a top priority" for the United States and President Donald Trump. Kim Jong Un said in a New Year's speech his country was in the final stages of developing missiles capable of hitting the United States. Trump reacted on Twitter by saying, "It won't happen."

Former U.S. Navy Admiral Samuel Locklear led the U.S. Pacific Command from 2012 to 2015. He says U.S. officials need to consider a number of ways for dealing with North Korea, including possible military action.

"Certainly there are many elements of national and coalition power that range from diplomatic to economic. But at the very base of all those would be military power that the U.S. and its allies must continue to consider."

International attempts at negotiations with North Korea on the nuclear issue have not been successful. The last six-nation talks on North Korea's nuclear program started in 2003, but have been suspended since late 2008.

The U.S. ambassador to the United Nations, Nikki Haley, said North Korea must take "positive action" before it can be taken seriously. She spoke to reporters after a U.N. Security Council meeting over the most recent launches.

Her comments came before U.S. Secretary of State Rex Tillerson's planned trip to Asia, where North Korea is likely a main issue for discussion.

One way for the U.S. and other countries to deal with North Korea's immediate threat is to deploy anti-missile defenses. American forces have already begun deploying an anti-missile system in South Korea. The system, called THAAD, could be operational as early as April, according to the South Korean military.

Bryan Lynn reported this story for VOA Learning English, based on reports from VOA News, the Associated Press, Reuters and other sources. George Grow was the editor.

We want to hear from you. Do you think the international community should respond to North Korea's latest missile tests? If so, how? Write to us in the Comments section, and visit 51VOA.COM.

rehearsal – n. practice for an event or performance

quest – n. effort or journey to get something done

enrich – v. improve the quality by adding something

tread – n. the part of a tire that touches the ground

preemption – n. acting beforehand to prevent something from happening

range – n. the distance to which a moving object can travel

surveillance – n. close watch kept by someone or something