Update Required To play the media you will need to either update your browser to a recent version or update your Flash plugin.
By Bryan Lynn
23 June, 2017


U.S. President Donald Trump is taking a new approach in trying to get Israel and the Palestinians to sign a peace deal.

He sent two negotiators with no international diplomatic experience to meet with both sides.

The team that traveled to Jerusalem and the West Bank was led by Jared Kushner, Trump's son-in-law and senior aide. Also taking part was Jason Greenblatt, an assistant to the president in charge of international negotiations.

Kushner, 36, is a former New York real estate businessman and newspaper publisher. Greenblatt also has a background in real estate. For many years, he also worked as the chief lawyer in the Trump Organization. In that position, he oversaw large business deals for the company.

For the past 50 years, the United Nations and many U.S. presidents have tried – but failed – to bring about lasting peace in the Middle East. 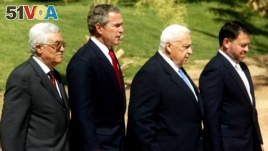 Egypt and Israel had been in a state of war.

The Camp David Accords led to a formal peace treaty signed between the two nations in 1979. And Sadat and Begin received the 1978 Nobel Peace Prize for their efforts.

Every American president since has launched their own Middle East peace efforts.

In the Trump administration's approach, Kushner and Greenblatt will bring their business experience to the negotiating table.

A spokesman for Kushner recently told Politico he had the president's goals in mind as he put together his team.

"Jared brought in people he trusts, and they are embracing the fact that they are not career diplomats but great listeners with deal-making experience who can try a new approach."

Guy Ziv is a professor at American University and an expert in Israeli-Palestinian relations. He says the Trump administration's approach is much different than past efforts.

"It's different in the sense that Trump has assigned the most difficult, the most intractable conflict to individuals with next to no experience and very little knowledge on the issues."

Trump has said that he considers a possible peace agreement between Israel and the Palestinians "the ultimate deal." He made a visit to the region last month. He appeared to have started a good working relationship with both sides. 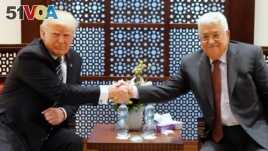 U.S. President Donald Trump (L) and Palestinian President Mahmoud Abbas shake hands before beginning their meeting at the Presidential Palace in the West Bank city of Bethlehem, May 23, 2017.

Many issues have prevented a peace agreement. Among them are disputes over borders and competing claims to Jerusalem. Others include the future of millions of displaced Palestinians and demands for more economic opportunities for Palestinians.

Ziv says he does not agree with the argument that, since previous negotiations by experienced diplomats have not led to an agreement, a completely new approach is needed.

"I'm very skeptical in this regard because we're dealing, as I said, with some of the most difficult, complex issues that take years to learn. And they're getting a crash course on something that takes years to learn."

He added that when it comes to actual policy, not much has changed from the Obama administration.

"Despite all the rhetoric, we are not seeing a different approach on any of the specifics. The (American) embassy (in Tel Aviv) is not being relocated (to Jerusalem). The administration is maintaining longstanding U.S. support for a two-state solution."

The two-state solution would create an independent Palestinian state to exist alongside Israel.

Ziv added that the Trump administration is also expressing opposition to new Jewish settlements in the West Bank. This issue has long been a major dispute between the two sides.

During his trip, Kushner first met in Jerusalem with Netanyahu, who is a friend of his father's. He then held talks with Abbas in the West Bank city of Ramallah.

After the talks, the White House said in statement that Netanyahu and Abbas had "reaffirmed their commitment" to the goal of getting a lasting peace agreement.

However, the statement also said that establishing peace "will take time." It added that U.S. officials urged both sides to do "everything possible to create an environment conducive to peacemaking."

Professor Ziv said he believes the only way a peace agreement will have a chance is if the Trump administration is willing to put pressure on both sides.

"Without a massive amount of pressure at the highest level, I don't think you're going to see any progress on the Israeli-Palestinian front."

Bryan Lynn wrote this story for VOA Learning English, based on reports from VOA News, the Associated Press and Reuters. Ashley Thompson was the editor.

framework – n. basic structure of something

approach – n. way of doing something

opportunity – n. chance to do something

crash course – n. class in which a lot of information is taught in a very short period of time

escalation – n. a rise or increase in activity

conducive – adj. make something possible of likely to happen