Update Required To play the media you will need to either update your browser to a recent version or update your Flash plugin.
By Bryan Lynn
06 January 2023

Every autumn, bears living along the western edge of the Hudson Bay pass through the sub-Arctic town of Churchill, Manitoba. The yearly movement has helped make the area's bears one of the most studied groups in the world. Bear-watching adds about $5.3 million to the local economy each year.

But a report recently issued by the government in Canada's northern territory of Nunavut found that just 618 polar bears remained in the area in 2021. This represented a 50 percent drop in the population from the 1980s. 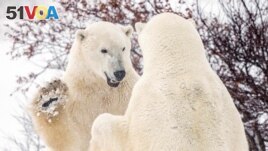 Polar bears depend on frozen salt water, called sea ice, to help them hunt seals for food. But the Arctic is now warming about four times faster than the rest of the world. Around Hudson Bay, seasonal sea ice is melting earlier in the spring, and forming later in the fall. This is forcing bears to go longer periods without food.

Scientists warned that a direct link between the population drop and sea ice loss in Hudson Bay is not fully clear. This is because four of the past five years have seen reasonably good ice conditions. Experts say climate-caused changes affecting the local sea population might also be driving polar bear numbers down.

Scientists are also concerned because the rate of population decline has sped up in recent years. Between 2011 and 2016, for example, the polar bear population dropped just 11 percent.

There are 19 populations of polar bears spread out among Russia, Alaska, Norway, Greenland and Canada. But Western Hudson Bay is one of the southernmost populations. Scientists predict the bears there are likely to become among the first to disappear.

A 2021 study in the journal Nature Climate Change found most of the world's polar bear populations are in danger of collapsing by 2100 if worldwide carbon emissions are not heavily reduced.

Researchers said the number of deaths in young bears and female bears in Western Hudson Bay is worrisome.

"Those are the types of bears we've always predicted would be affected by changes in the environment," said Stephen Atkinson. He was a lead writer of the government report and has studied polar bear populations for more than 30 years.

Young bears need energy to grow and cannot survive long periods without enough food. Female bears struggle because they use up a lot of energy caring for young bears.

Atkinson said the ability of polar bears in the Western Hudson Bay to reproduce will decrease, "because you simply have fewer young bears that survive and become adults."

type – n. a person or thing that is part of a group of people or things that have similar qualities