Update Required To play the media you will need to either update your browser to a recent version or update your Flash plugin.
By Milagros Ardin and Christopher Cruise
10 September, 2012

SHIRLEY GRIFFITH: This is SCIENCE IN THE NEWS, in VOA Special English. I'm Shirley Griffith.


CHRISTOPHER CRUISE: And I'm Christopher Cruise. Today, we tell about an anti-cancer drug recently shown to fight HIV, the virus that causes the disease AIDS. We tell about another drug that may help reduce the number of HIV infections. And we have a report on how researchers are turning to the high seas for new medicines.

??SHIRLEY GRIFFITH: People infected with the human immunodeficiency virus must take anti-retroviral drugs for the rest of their lives to keep HIV under control. If they fail to do so, HIV-infected cells hidden within the body can become active. When that happens, the infection can return and attack the body, causing AIDS. 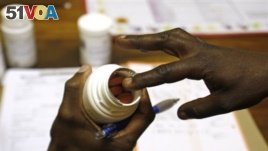 People infected with the human immunodeficiency virus must take anti-retroviral drugs for the rest of their lives to keep HIV under control
Recently, researchers discovered that a drug used to treat cancer can find and attack HIV-infected cells. Researchers say the discovery is an important step in the effort to find a way to cure those infected.

HIV has found a way to survive inside the human body by making itself part of the genetic structure of T-cells. These white blood cells are part of the body's natural defenses for fighting disease. They also are targets of the AIDS virus.

CHRISTOPHER CRUISE: Anti-retroviral drugs can suppress HIV to levels that are difficult to measure. That gives the body's natural defense system a chance to repair itself. Yet the virus remains present in extremely small amounts -- in one of every one million T-cells. But it will come back to life if the infected individual ever stops taking anti-retroviral drugs.

Now, researchers have found a way to force the virus out of its hiding place. Their weapon is a drug used for treating lymphoma -- a rare and sometimes deadly cancer.

David Margolis is a professor of microbiology and immunology at the University of North Carolina, Chapel Hill. He has been studying how HIV hides within immune-system cells. He says that in some lymphomas, the drug vorinostat makes cancer cells die. But he says that in HIV-infected cells, vorinostat causes the virus to show itself.

DAVID MARGOLIS: "Theoretically, doing this clinically would be a way to sort of unmask the hidden virus -- flush the virus out of hiding. And that might then allow us to develop ways to get rid of the leftover virus in people that are on treatment so that they could stop treatment and there would be nowhere for the virus to come back from."

SHIRLEY GRIFFITH: Professor Margolis and his team studied eight HIV-infected patients who were taking anti-retroviral drugs. In all eight men, the spread of the virus was said to be under control. Their levels of HIV CD4 T cells -- which the virus uses to reproduce itself -- were measured both before and after the men were given vorinostat.

DAVID MARGOLIS: "What we saw in every single person was a tiny amount of the virus detectable before the dose of the drug. And the amount of virus that was detectable went up on average about five-fold, five times, after just a single exposure to the drug."

Professor Margolis says his experiment shows that hidden HIV can be forced out of hiding with vorinostat. He says the virus can then be targeted for destruction by anti-AIDS drugs. But he says none of the infected men were cured.

The professor carried out the study with the help of four other teams of researchers. They were from the National Cancer Institute, the Harvard University School of Public Health, University of California, San Diego, and Merck and Company -- the maker of vorinostat.

Their report was published in the journal Nature. We have placed a link to a summary of the report on our website, 51voa.com.

CHRISTOPHER CRUISE: The United States Food and Drug Administration recently approved a drug that may help reduce the number of HIV infections. The drug, Truvada, is for healthy people to take to reduce their risk of infection. They are to swallow a single Truvada pill every day to protect themselves against HIV.

The approval came after years of research and testing. The drug is already used in many other countries to treat AIDS patients. The FDA approved Truvada in two thousand four for use with other anti-retroviral drugs to treat HIV-infected people twelve years and older. It will now also be used to protect people who are not infected, but have a high risk of getting the disease.

SHIRLEY GRIFFITH: FDA officials say the safety of Truvada was confirmed in two large studies. One study involved more than four thousand seven hundred heterosexual couples. In these relationships, one person was infected with HIV; their partner was not. Tests showed that Truvada reduced the risk of becoming infected by seventy-five percent when compared with a pill to a placebo or harmless substance.

Kali Lindsey of the National Minority AIDS Council says the drug could have a major effect.

KALI LINDSEY: "Using Truvada -- or pre-exposure prophylaxis -- to prevent acquiring HIV for an HIV negative person is a game-changer, and it's something that I believe is going to really take us to the next level."

Gottfried Hirnchall is the director of the HIV/AIDS program at the World Health Organization in Switzerland. He spoke to VOA on Skype.

DR. GOTTFRIED HIRNCHALL: "We have to really see how this could best be done and which would be the populations or the individuals where this would pay off."

Dr. Hirnchall says intervention with Truvada is not for everyone.

DR. GOTTFRIED HIRNCHALL: "Let's remember, once you start on pre-exposure prophylaxis you cannot just take it some days and not on other days. So we will really have to provide the support to people to take this every single day of their life. And let us also not forget we have many other prevention methods now available that we can use."

CHRISTOPHER CRUISE: Using Truvada can be costly. Only those who can pay for the drug for the rest of their lives can start using it. And AIDS experts say its approval does not end the need for safe sex practices, like men using condoms.

Yet not all AIDS activists believe people should take Truvada. Michael Weinstein is head of the AIDS Healthcare Foundation. He says the drug can cause damage to a person's kidneys and could cause bone loss. The FDA says serious bone or kidney problems in the Truvada studies were "uncommon."

Michael Weinstein says people taking Truvada may stop using condoms, which he notes is a proven safe way of preventing infection. But he warns that if people do not take the drug every day, "they are going to think they are protected when they are not."

SHIRLEY GRIFFITH: People have turned to nature for medicines since ancient times. Modern scientists have searched the world's rainforests for chemicals to fight disease. But now, they are turning somewhere else -- the world's oceans.

At least twenty six drugs made from sea creatures are on the market or in development. Scientists are working to make more.

Chemist Mande Holford has an unusual partner in her search -- a marine snail that eats fish. She says the snails' tongue like proboscides is deadly. They use it to inject the target with a liquid made from poisonous amino acids called peptides.

MANDE HOLFORD: "What I'd like to say is that the snails produce sort of a cluster bomb. Inside of each venom you have between fifty to two hundred different peptides. And all of those peptides target something major along the nervous system. One thing that they hit is a pain signal. When they silence the pain signal, the prey doesn't go into fight or flight mode."

The fish stays calm, even while it is being eaten. Chemists already have had one major success using the peptides – a drug called Prialt eases pain for HIV and cancer patients.

CHRISTOPHER CRUISE: David Newman directs the Natural Products Branch of America's National Cancer Institute. After years of collecting organisms on land, his team now collects only sea life, including sponges and corals. Because these organisms cannot move, he says, they depend on chemical warfare.

DAVID NEWMAN: "I have been known to say that weapons of mass destruction are alive and well on a coral reef, if you happen to be a fellow sponge who's trying to encroach on someone's territory or you're a starfish that's trying to eat the sponge. These are extremely toxic agents because of the dilution effect of seawater."

Such strong chemicals are inviting to any group that is looking for ways to kill cancer cells. Far below coral reefs lie what could be an even more promising source of new medicines: mud. Close to seventy percent of the surface of the earth is really deep, ocean mud says William Fenical. He directs the Center for Marine Biotechnology and Biomedicine at the Scripps Institute for Oceanography in California. His team looks for microorganisms living on the sea floor.

WILLIAM FENICAL: "For the last fifty years, microorganisms that occur on land have been exploited for the production of antibiotics, cancer drugs, and cholesterol-lowering drugs. What we believe is that the ocean is a completely new resource for such microbial product."

His team already has two drugs in development and he sees no end to the promise of ocean-based medicines.

SHIRLEY GRIFFITH: This SCIENCE IN THE NEWS was written by Milagros Ardin and Christopher Cruise. June Simms was our producer. I'm Shirley Griffith.

CHRISTOPHER CRUISE: And I'm Christopher Cruise. You can find transcripts, MP3s and podcasts of our programs at 51voa.com. And you can find us on Twitter and YouTube at VOA Learning English. Join us again next week for more news about science in Special English on the Voice of America.
Related Articles
go top