Update Required To play the media you will need to either update your browser to a recent version or update your Flash plugin.
By Dan Friedell
19 February, 2016


During a campaign visit in Nevada earlier this week, Hillary Clinton told a story about her husband, Bill.

Bill, or William J. Clinton, was the U.S. president for eight years, starting in 1993.

Before he was president. Clinton was a politician in his home state of Arkansas. 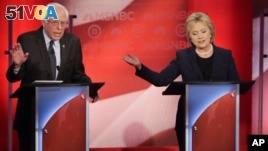 One of his opponents produced an ad using the sound of a barking dog to mock Clinton and question his truthfulness.

Hillary Clinton, who is running for U.S. president now, said the funny ad had people barking for days in Arkansas.

And then she made her point by barking. She said she wished she could send that dog to the Republican candidates and have it bark every time they made a false statement.

Alex Lee is a video producer from CNN. He used the social media app called Vine to put together a series of clips showing all the times presidential candidates have made animal sounds during the campaign.

What do you think about the noises these candidates are making? Write to us in the Comments Section or on 51VOA.COM.

ad – n. something (such as a short film or a written notice) that is shown or presented to the public to help sell a product or to make an announcement

bark – v. to make a short, loud sound like a dog

mock – v. to laugh at or make fun of by copying an action or way of behaving or speaking