Cantonese Speakers Worry about Future of Their Language

Update Required To play the media you will need to either update your browser to a recent version or update your Flash plugin.
By John Russell
04 October 2022


For years, learning to speak Cantonese was not that hard in San Francisco. It is a place where Cantonese speakers from South China have migrated for over 150 years. But now, there is fear that the Cantonese language and culture might not survive current political and social changes. 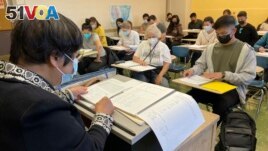 City College of San Francisco Cantonese Professor Grace Yu, who has been teaching at the community college for more than 30 years, leads a class in San Francisco on Aug. 31, 2022. (AP Photo/Haven Daley)

Cantonese is spoken by some 85 million people worldwide. In comparison, there are around 1 billion Mandarin speakers. Additionally, the Chinese government is pushing for the wider use of Mandarin as the national language.

This change has affected the use of Cantonese from Britain to the United States.

In Britain, as in the U.S., most schools that offer Chinese usually teach Mandarin. As a result, many migrant families are struggling to find ways to pass on their Cantonese language and culture.

Ceci Pang runs classes for children at Rainbow Seeds Cantonese school in London, England. "Many (parents) want their kids to be able to communicate with their grandparents," she said. "It's just so hard here, there are so few learning resources and lots of parents get frustrated and give up. That's usually the point the parents come to me."

Pang said she has not noticed many direct concerns about Cantonese dying out as a language. But, she said, that may change as more Hong Kong migrants move to Britain.

"I think in a few years when more and more Hong Kong families settle here, there may be more parents worried about their children rejecting Cantonese altogether..." she said.

In China, people have voiced concerns for years about a drop in the usage of Cantonese. The language is spoken in southeastern China's Guangdong area and the cities of Hong Kong and Macao.

Guangzhou, formerly known as Canton, is considered the birthplace of Cantonese. But today it is a center for manufacturing and technology jobs that bring in Mandarin speakers. Now, many young people can only understand Cantonese but do not speak the language.

While Cantonese is not as important in people's lives as it used to be, it is too early to say the language is in crisis in Guangzhou. Cantonese is still spoken in homes and among friends. There are Cantonese television channels as well as Cantonese announcements on public transport.

In Hong Kong, however, Cantonese remains the city's top language. It is used by 90 percent of the population. That information comes from Lau Chaak-ming, assistant professor of linguistics at the Education University of Hong Kong.

While most classes in Hong Kong's schools are still taught in Cantonese, many have added Mandarin to their curriculum as the Chinese government tries to strengthen its hold on the city. The arrival of mainland Chinese for work or education has also increased Mandarin use. In addition, more Hong Kongers have learned to speak Mandarin to do business with the mainland.

But such changes have not destroyed Cantonese, Lau said. "Cantonese has never been stronger in Hong Kong," he added.

It is a different story in the U.S. The teaching of Cantonese has decreased somewhat, including in San Francisco, a city that has drawn many Cantonese speakers over the years. The San Francisco school system has Cantonese and Mandarin programs for younger students. But in high school, Mandarin is the only Chinese language available.

In 1990, when Grace Yu was hired at City College of San Francisco, there were four Cantonese teachers and several Cantonese classes offered each year. But for the past six years, Yu has been the only Cantonese professor, teaching three classes a year.

"Vacancies were not replaced with Cantonese instructors. Instead they hired Mandarin instructors," said Yu. She described her situation as "kind of lonely."

This spring, City College approved a document to keep the Cantonese program with at least one Cantonese instructor. Yu noted that with the document, "Cantonese classes will not be canceled if I retire."

Aleyda Poe has been overseeing the Cantonese kindergarten at Merit Chinese School in Plano, Texas, for more than 10 years. Poe put her two sons in the school so that they could learn about Cantonese language and culture. Now, she is helping other families do the same.

Terry Tang, Haven Daley and Sylvia Hui reported on this story for the Associated Press. John Russell adapted it for VOA Learning English.

tone – n. the highness or lowness of a spoken syllable; the quality of a person's voice

frustrated – adj. discouraged, or upset because of being unable to do or complete something

vacancy – n. a job or position that is available to be taken