Update Required To play the media you will need to either update your browser to a recent version or update your Flash plugin.
By Bryan Lynn
25 August 2022


A vehicle once driven by Britain's Princess Diana is set to go up for sale this weekend.

The Ford Escort RS Turbo model was driven by the late Princess of Wales from 1985 to 1988. It is to be auctioned Saturday at a racing festival in Britain's Northamptonshire area.

Auction officials said they expect the car to sell for at least $118,000. 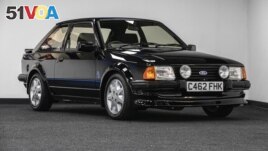 A 1985 Ford Escort RS Turbo S1 car formerly driven by the late Princess Diana, offered for sale via Silverstone Auctions on August 27, 2022, is seen in this undated handout photo taken in an unknown location. (Silverstone Auctions /Handout via REUTERS)

The Ford Escort has been driven about 40,000 kilometers. Arwel Richards is the Classic Car Specialist at Silverstone Auctions. He told Reuters he thinks the vehicle was "a very brave choice" for Princess Diana.

"All the other members of the royal family would be driving around London in the back... of an official car," Richards said. "And she's driving in a car... that you would see on a housing estate not outside the palace."

Next week marks 25 years since Diana died at age 36. The princess was killed in an automobile crash while photographers riding on motorbikes chased her official car in Paris.

The sale will take place at the Silverstone Classic festival. It is a three-day event near the town of Silverstone that includes motor racing and music performances.

Among other things to be sold at the auction include a Rolls-Royce convertible once owned by Bee Gees band member Maurice Gibb. The singer, who died in 2003, bought the black 1973 Corniche in 1979. The vehicle stayed in the family until 2012. It is listed with a "guide price" starting at $118,000.

Also to be sold is a 1973 British-made Rover P5. The car was used to drive former British Prime Minister Margaret Thatcher to meet Queen Elizabeth II after Thatcher's election win in 1979. It has a listed "guide price" starting at $41,000.

auction – n. a sale in which things are sold to the person offering the most money

discretion – n. the act of taking care not to attract too much attention, especially by keeping something secret

estate – n. a large area of land in the country that is owned by a person or organization

palace – n. a large structure where important people live, like kings and queens

convertible – n. a car that has a folding roof