Car Maker Honda Back to Work in China's Wuhan

Update Required To play the media you will need to either update your browser to a recent version or update your Flash plugin.
By Susan Shand
09 April 2020


Japan's Honda Motor Company has reopened its factory in the Chinese city of Wuhan, more than two months after it was closed to help stop the spread of the coronavirus.

But the reopening came with new virus protection measures, including temperature checks for workers and a rule that employees keep more than one meter apart.

The factory is co-owned by Honda and China's Dongfeng Motor Group. It was shut in late January when officials ordered a lockdown in Wuhan over the coronavirus epidemic. 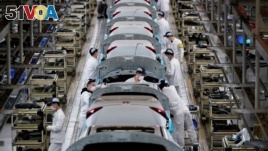 Employees work on a production line inside a Dongfeng Honda factory after lockdown measures in Wuhan were further eased, April 8, 2020. (REUTERS/Aly Song)

The factory reopened on March 11 and began operations slowly. It is now back to its pre-virus manufacturing rate, Li Shiquan told reporters. He is the assistant director of one of the factories.

Returning workers were asked to report where they had been since the epidemic started, Li said. They were also asked to get their temperatures checked. A high temperature is one of the main signs that someone might be infected with the coronavirus.

Li said about 98 percent of the 12,000 factory workers were now back on the job.

"We have many customers who are waiting for cars," he said, adding that workers were putting in extra hours to meet demand.

The government permitted people to leave Wuhan on Wednesday in what is believed to be an important victory in the battle against the coronavirus.

China's factories began reopening weeks ago as infection rates in many areas started to decrease.

Now, other countries such as Italy and the United States are trying to stop the spread of the virus by asking businesses to close and the public to stay home.

Honda has stopped manufacturing in the U.S. and Canada until May 1. It has also closed factories in countries from Britain to Thailand. Some of its Japanese factories are also closing as necessary.

The plan included the closure of break areas to prevent groups from gathering. Reuters reporters on a visit to the factory saw workers wearing gloves and masks. Most were staying a meter apart.

Li said no coronavirus cases had been found since the factory reopened.

He added that the factory's more than 500 suppliers in Wuhan had also been permitted to reopen on March 11.

The Reuters News Agency reported this story. Susan Shand adapted it for Learning English. Bryan Lynn was the editor.

lockdown – n. to completely shut down a town or city

epidemic – n. an illness that is transmitted to many people

customer – n. someone who buys something from a store or business