The Cask of Amontillado

Update Required To play the media you will need to either update your browser to a recent version or update your Flash plugin.
By VOA
11 December 2020


Our story today is called "The Cask of Amontillado." It was written by Edgar Allan Poe. Here is Larry West with the story.

Storyteller: Fortunato and I both were members of very old and important Italian families. We used to play together when we were children.

Fortunato was bigger, richer and more handsome than I was. And he enjoyed making me look like a fool. He hurt my feelings a thousand times during the years of my childhood. I never showed my anger, however. So, he thought we were good friends. But I promised myself that one day I would punish Fortunato for his insults to me. 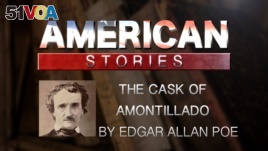 The Cask of Amontillado

Many years passed. Fortunato married a rich and beautiful woman who gave him sons. Deep in my heart I hated him, but I never said or did anything that showed him how I really felt. When I smiled at him, he thought it was because we were friends.

He did not know it was the thought of his death that made me smile.

Everyone in our town respected Fortunato. Some men were afraid of him because he was so rich and powerful. He had a weak spot, however. He thought he was an excellent judge of wine. I also was an expert on wine. I spent a lot of money buying rare and costly wines. I stored the wines in the dark rooms under my family's palace.

Our palace was one of the oldest buildings in the town. The Montresor family had lived in it for hundreds of years. We had buried our dead in the rooms under the palace. These tombs were quiet, dark places that no one but myself ever visited.

Late one evening during carnival season, I happened to meet Fortunato on the street. He was going home alone from a party. Fortunato was beautiful in his silk suit made of many colors: yellow, green, purple and red. On his head he wore an orange cap, covered with little silver bells. I could see he had been drinking too much wine. He threw his arms around me. He said he was glad to see me.

I said I was glad to see him, too because I had a little problem.

"What is it?" he asked, putting his large hand on my shoulder.

"My dear Fortunato," I said, "I'm afraid I have been very stupid. The man who sells me wine said he had a rare barrel of Amontillado wine. I believed him and I bought it from him. But now, I am not so sure that the wine is really Amontillado."

"What!" he said, "A cask of Amontillado at this time of year. An entire barrel? Impossible!"

"Yes, I was very stupid. I paid the wine man the full price he wanted without asking you to taste the wine first. But I couldn't find you and I was afraid he would sell the cask of Amontillado to someone else. So I bought it."

"A cask of Amontillado!" Fortunato repeated. "Where is it?"

I pretended I didn't hear his question. Instead I told him I was going to visit our friend Lucresi. "He will be able to tell me if the wine is really Amontillado," I said.

I smiled to myself and said "But some people say that he is as good a judge of wine as you are."

Fortunato grabbed my arm. "Take me to it," he said. "I'll taste the Amontillado for you."

"But my friend," I protested, "it is late. The wine is in my wine cellar, underneath the palace. Those rooms are very damp and cold and the walls drip with water."

"I don't care," he said. "I am the only person who can tell you if your wine man has cheated you. Lucresi cannot!"

Fortunato turned, and still holding me by the arm, pulled me down the street to my home. The building was empty. My servants were enjoying carnival. I knew they would be gone all night.

I took two large candles, lit them and gave one to Fortunato. I started down the dark, twisting stairway with Fortunato close behind me. At the bottom of the stairs, the damp air wrapped itself around our bodies.

"Where are we?" Fortunato asked. "I thought you said the cask of Amontillado was in your wine cellar."

"It is," I said. "The wine cellar is just beyond these tombs where the dead of my family are kept. Surely, you are not afraid of walking through the tombs.

He turned and looked into my eyes. "Tombs?" he said. He began to cough. The silver bells on his cap jingled.

"My poor friend," I said, "how long have you had that cough?"

"It's nothing," he said, but he couldn't stop coughing.

"Come," I said firmly, "we will go back upstairs. Your health is important.You are rich, respected, admired, and loved. You have a wife and children. Many people would miss you if you died. We will go back before you get seriously ill. I can go to Lucresi for help with the wine."

"That is true," I said, "but you must be careful." He took my arm and we began to walk through the cold, dark rooms. We went deeper and deeper into the cellar.

Finally, we arrived in a small room. Bones were pushed high against one wall. A doorway in another wall opened to an even smaller room, about one meter wide and two meters high. Its walls were solid rock.

"Here we are," I said. "I hid the cask of Amontillado in there." I pointed to the smaller room. Fortunato lifted his candle and stepped into the tiny room. I immediately followed him. He stood stupidly staring at two iron handcuffs chained to a wall of the tiny room. I grabbed his arms and locked them into the metal handcuffs. It took only a moment. He was too surprised to fight me.

I stepped outside the small room.

"Where is the Amontillado?" he cried.

"Ah yes," I said, "the cask of Amontillado." I leaned over and began pushing aside the pile of bones against the wall. Under the bones was a basket of stone blocks, some cement and a small shovel. I had hidden the materials there earlier. I began to fill the doorway of the tiny room with stones and cement.

By the time I laid the first row of stones Fortunato was no longer drunk. I heard him moaning inside the tiny room for ten minutes. Then there was a long silence.

I finished the second and third rows of stone blocks. As I began the fourth row, I heard Fortunato begin to shake the chains that held him to the wall. He was trying to pull them out of the granite wall.

I smiled to myself and stopped working so that I could better enjoy listening to the noise. After a few minutes, he stopped. I finished the fifth, the sixth and the seventh rows of stones. The wall I was building in the doorway was now almost up to my shoulders.

Suddenly, loud screams burst from the throat of the chained man. For a moment I worried. What if someone heard him? Then I placed my hand on the solid rock of the walls and felt safe. I looked into the tiny room, where he was still screaming. And I began to scream, too. My screams grew louder than his and he stopped.

It was now almost midnight. I finished the eighth, the ninth and the tenth rows. All that was left was a stone for the last hole in the wall. I was about to push it in when I heard a low laugh from behind the stones.

The laugh made the hair on my head stand up. Then Fortunato spoke, in a sad voice that no longer sounded like him.

He said, "Well, you have played a good joke on me. We will laugh about it soon over a glass of that Amontillado. But isn't it getting late. My wife and my friends will be waiting for us. Let us go."

I waited for him to say something else. I heard only my own breathing. "Fortunato!" I called. No answer. I called again. "Fortunato!" Still no answer.

I hurried to put the last stone into the wall and put the cement around it. Then I pushed the pile of bones in front of the new wall I had built.

That was fifty years ago. For half a century now, no one has touched those bones. "May he rest in peace!"

carnival - n. a festival held before Lent that includes music and dancing

cask - n. a container that is shaped like a barrel and is used for holding liquids ("an oak cask for wine")

cellar - n. the part of a building that is entirely or partly below the ground