Update Required To play the media you will need to either update your browser to a recent version or update your Flash plugin.
By Anne Ball
15 September, 2017


The spacecraft Cassini ended its 20-year mission on Friday with a final death dive into the planet Saturn.

Cassini had actually burned up like a meteor 83 minutes earlier, as it dove through Saturn's atmosphere. But it took that many minutes for the news to reach Earth more than one-and-a-half billion kilometers away. 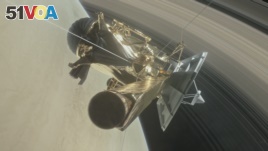 Program manager Earl Maize marked the end of the spacecraft and praised the work of the NASA team.

The crash was planned by scientists and engineers at NASA's JPL. NASA is the United States space agency. They decided to end the mission this way because of an important find during the mission -- the possibility of life on one of Saturn's moons.

Saturn is the sixth planet in our solar system. It is known for its famous rings and many moons. Cassini's study of the system of Saturn's rings and moons brought many surprises. The researchers discovered ocean worlds that may contain the elements for life on some of Saturn's moons.

"At the time of its design, we had no idea that ocean worlds existed in the outer solar system."

Another unexpected discovery came from the south pole of Enceladus, a moon that sits in one of Saturn's rings. Molly Bittner is a spacecraft operations systems engineer. She explains what they found out about Enceladus.

"It has a liquid water ocean underneath and it shoots geysers. So these cracks open up and geysers shoot out."

Cassini was also able to gather data from Titan, Saturn's largest moon. It has lakes and seas of liquid methane and ethane, instead of water. There is also evidence of a liquid ocean beneath the surface that probably contains ammonia and water. Scientists and engineers say the environment could hold life. Morgan Cable says life may look different than on our planet. 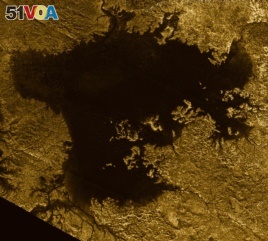 This 2007 image made available by NASA shows a hydrocarbon sea named Ligeia Mare on Saturn's moon Titan, as seen by the Cassini spacecraft.

"We're still open to trying to look for weird life in places like this and we found a strange place right here in our solar system."

The possibility of life on Saturn's moons made NASA engineers think about how to best end Cassini's mission as it ran out of fuel. Cassini carried organisms from Earth. They did not want it to land on a moon like Enceladus because, if it already holds life, Cassini could have contaminated it.

"I want to find life elsewhere in a place like Enceladus but I don't want to realize later on that we put it there."

Scientists and engineers are already looking ahead to future missions back to Saturn and its moons. Cable says they want to look deeper into the possibility of finding life there.

"And I think with today's instrumentation, things that we could put on a spacecraft right now, we could find that life with our instruments of today."

Right up until it crashed into Saturn, Cassini was still sending back important data to Earth. That information will keep researchers busy as they analyze it for years to come.

meteor – n. a piece of rock or metal that burns and glows brightly in the sky as it falls from outer space into the Earth's atmosphere

hydro thermal – adj. of or relating to hot water —used especially of the formation of minerals by hot solutions rising from a cooling magma

vent – n. an opening through which air, steam, smoke, liquid, etc., can go into or out