Update Required To play the media you will need to either update your browser to a recent version or update your Flash plugin.
By Marsha James
26 April, 2015

Most people go to a café to get their daily cup of coffee. At Cat Town Café in Oakland, California, they can also observe and play with cats. Cat Town Café is the first cat café in the U.S. It is a combination of a coffee shop and an adoption center for cats.

The first cat café opened in Asia in the 1990s. They are now found across Asia and Europe. Cat Town Café in California open its doors last year, becoming the first permanent one in the United States.

The cat area has colorful, eye-catching paintings on the walls, comfortable chairs and sofas, and huge painted wooden play structures. About 20 cats sleep in the sun or relax in front of big windows that overlook a busy street. For a small entrance fee, customers spend an hour with the cats -- playing, touching or just watching them. 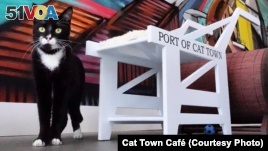 "My son enjoys cats so thought it would be a fun place for him to stop and say 'hello.' Where we live, we cannot have cats. We have not had any pets for him. So this is a nice opportunity for him to come see animals."

Mike Deluca was looking to adopt a cat for his girlfriend's son, Michael. On their second visit to Cat Town Café, they found Juniper, a young gray cat with marks like a tiger.

"We just fell in love with the cats they had there. They had a great assortment of cats, kittens, adult kittens. And the staff was amazing. And we decided to get a cat for her son. And it's been going great ever since."

Adam Myatt co-founded Cat Town with Ann Dunn. He says they saw cat cafés as an opportunity to bring attention to the situation of stray cats – in other words, cats without homes.

Ann Dunn started a rescue center four years ago, and since then has cared for and adopted out hundreds of homeless cats.

"Could we just do this like as an adoption center? Could we just tack this coffee thing on top of it and bring more people in to meet these cats?"

Millions of dogs and cats are put to sleep each year in U.S. animal shelters. In Oakland, the cat euthanasia rate was 40 percent four years ago. Thanks to Cat Town and other rescue centers, as well as campaigns to stop animals from reproducing, the number of cats killed at Oakland shelters has now dropped to 20 percent.

Ann Dunn says the hundreds of volunteers who help out at the café and provide foster homes have made a big difference.

"The measure of our success is how many cats are being adopted, and we've more than doubled our adoption rate as an organization since we opened this. So it's succeeding and it's an exciting thing for the city of Oakland to have the nation's first cat café. We're drawing people who are coming, not just from getting in their cars and coming here, to Oakland, but people who are getting on planes and coming here."

Cat cafés are quickly spreading to other cities nationwide. Since Cat Town opened, cat cafés have started in New York, Colorado and Oregon.

This report was based on a story from reporter JoAnn Mar. Marsha James wrote it for VOA Learning English. Kelly Jean Kelly was the editor.

café – n. a small restaurant where you can get simple meals and drinks, such as coffee

adopt – v. to take a pet legally as your own

assortment – n. a group or collection of different things

tack – v. to add on or attach something

euthanasia – n. the act or practice of killing someone or something that is very sick or injured in order to prevent any more suffering

foster – adj. a situation in which for a period of time an animal lives with and is cared for by people who are not the owners