Update Required To play the media you will need to either update your browser to a recent version or update your Flash plugin.
By Hai Do
10 January, 2019


The Catholic Church rejected the official result of the Democratic Republic of the Congo's presidential election on Thursday. And the losing candidate called the result a "robbery."

Election officials announced that opposition candidate Felix Tshisekedi won the election. He is set to replace President Joseph Kabila, who has ruled the Democratic Republic of the Congo for 18 years.

But pre-election studies had predicted an easy win for Martin Fayulu, another opposition candidate.

Opposition candidate Martin Fayulu wipes his face before speaking to the press at his headquarters in Kinshasa, DRC, Jan. 10, 2019. Fayulu, who came second in the presidential poll behind Felix Tshisekedi, called the results fraudulent.

The influential Catholic Church had 40,000 observers at voting stations across the country. It said its own findings did not support the official results. Three diplomats briefed on the Church's mission said their findings clearly showed Fayulu had won.

The Church said in a statement, "The results from the presidential election as published by CENI [Independent National Electoral Commission] do not correspond to the data collected by our observation mission from polling stations and vote counts."

Fayulu claimed that election officials helped Tshisekedi to win as part of a deal to protect members of the outgoing Kabila administration. He called the official result a "robbery" and asked supporters to "rise as one man to protect victory."

Fayulu has led anti-government demonstrations. He has also spoken out against corruption in the Congo, a country rich with minerals.

It was not clear whether Fayulu would dispute the election results in court. He has two days after the announcement of official results to file official disputes. The constitutional court then has seven days to consider disputes before results are final.

Tshisekedi's supporters celebrated his victory. But Thursday's action by the Church could make it harder for him to win wider acceptance.

An official from the United Nations' peacekeeping operations said Tshisekedi's win might lead to some temporary calm. But the official told the Reuters news agency that former militia and political supporters of Fayulu might rebel.

Police said three people were killed in the eastern city of Kikwit, where Fayulu received strong support. But much of the country appears to be staying calm.

Many Congolese fear that a dispute could restart violence. Civil wars in the Democratic Republic of the Congo have killed millions of people since the 1990s. 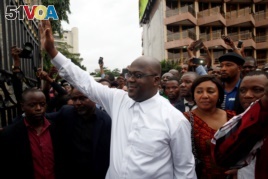 Felix Tshisekedi, leader of the Congolese main opposition party, the Union for Democracy and Social Progress (UDPS) who was announced as the winner of the presidential elections gestures to his supporters in Kinshasa, Democratic Republic of Congo, Jan. 10

"Opposite of what we expected"

The international community has not congratulated Tshisekedi on his victory. Many appeared to be watching for the reactions of Fayulu's supporters.

French Foreign Minister Jean-Yves Le Drian said the results "are the opposite to what we expected."

Britain's foreign secretary, Jeremy Hunt, said he was "very concerned" about reported differences in Congo's results. He added that the United Nations Security Council would discuss the issue on Friday.

European Union spokeswoman Maja Kocijancic said, "We are also waiting for the reactions of different observation missions that have observed the elections...and partners, particularly in Africa."

Over the past week, the United States and other governments have called on the electoral commission to publish correct election results. The U.S. has also deployed troops in nearby Gabon and has urged American citizens to leave Congo because of security concerns.

Hai Do adapted this story for Learning English based on reports from Reuters, the Associated Press and VOA. Ashley Thompson was the editor.

brief - v. to give information

correspond - v. to be similar or equal to something