Update Required To play the media you will need to either update your browser to a recent version or update your Flash plugin.
By Anna Matteo
23 October 2021


These days, there are computer programs to help people do just about anything – from studying a language to looking for a job.

There are even apps for praying.

The Vatican recently released its latest version of the prayer app "Click to Pray." Roman Catholic Church leaders said they hope "Click to Pray 2.0" will give people an improved "praying experience" in a fast, online world.

Earlier this month, seven Catholic officials held a news conference to demonstrate "Click to Pray 2.0." It is the first major update of the app since the launch of "Click to Pray" in 2016.

At the conference, the officials presented to reporters a video showing the app's new functions. One is a personal prayer planner. It lets users plan their prayer time for each day. And then a reminder function tells them to stop, take a break from the rest of the world, and pray.

"Praying is not a waste of time, as we sometimes think," said Father Frederic Fornos.

He recently spoke with Reuters news agency about the app. He also shared his ideas on the importance of prayer. "Prayer," he said, "is like the seed in the darkness of the earth, which will show its fruit in its own good time."

The prayer app is available in six Western languages and Chinese. It gives users issues to pray about. This lets users pray together with Pope Francis, the leader of the Roman Catholic Church. For example, users could pray for peace in one part of the world using the app. 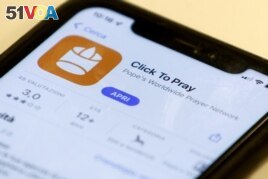 The 'Click to Pray' app is a smartphone app designed to allow the faithful to pray with a click. Here it is seen on a mobile phone. (REUTERS/Guglielmo Mangiapane/Illustration)

The app also offers a "School of Prayer." It gives support to those people who are finding it hard to get started. The "School of Prayer" can also help people form prayer groups around the world.

An Italian priest in St. Peter's Square in Vatican City praised the new app. Father Cosimo Schena said the app is especially good for people who have strayed. These are people who have left the church for some time and may find it difficult to return.

"It is an extraordinary thing," the cleric told Reuters, "because it allows you to reach people that you don't physically meet. It becomes a bridge to reach those hearts that sometimes have strayed from God."

Officials said they know that the app might not be right for everyone. It is important to note, they said, that this app is not a substitute for traditional prayer.

The secretary of the Vatican's communications department is Monsignor Lucio Ruiz. He said, "It is not meant to invalidate the other places or ways to pray. It is one more way to reach people who want or need a new way."

Under Pope Francis, the Roman Catholic Church has increased its presence on social media. The prayer app is another way the church is using technology to reach people.

app (application) –n. a computer program that carries out a specific job

function –n. the purpose or activity that something (such as an app) does or is used for

reminder –n. something that causes you to remember or to think about something

stray –v. to go in a direction that is away from a group or from the place where you should be

invalidate –v. to weaken or destroy the effect of (something)

presence –n. the state of being seen or noticed in a place or on a medium where people can see what you are doing