Update Required To play the media you will need to either update your browser to a recent version or update your Flash plugin.
By VOA
03 July, 2014

Today is America's Independence Day holiday. On July 4th, 1776, the 13 American colonies officially declared their independence from Britain. It took several years of fighting, but the United States won its freedom.

Americans have observed Independence Day throughout the country's history. But it did not become an official holiday until 1870. 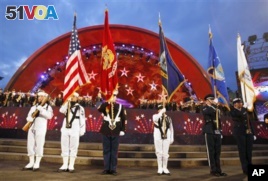 A military color guard prepares for the playing of the National Anthem at a 4th of July concert.
On our show today, Mary Tillotson and Steve Ember play some songs that celebrate America.

Americans celebrate the Fourth of July with family gatherings, parades, speeches and fireworks. They also celebrate with patriotic music.

The official song of the United States is "The Star-Spangled Banner." Francis Scott Key wrote the words in 1814. At that time, America and Britain were at war. Francis Scott Key watched as British forces attacked Fort McHenry in Baltimore, Maryland. Through the smoke and fire, he could see a huge American flag flying over the army base.

The next morning, after the battle, he looked to see which flag flew over Fort McHenry. It would tell which side had won. 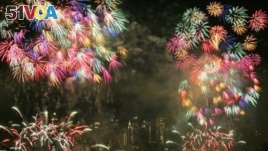 Key saw that the American flag still flew. He wrote a poem re-creating the event. Soon after, music was added to his words. The United States Congress made "The Star-Spangled Banner" the national song in 1931.

Americans sing it at the beginning of many public meetings and sports events. Here is America's national song, performed by Faith Hill.

Some people say "The Star-Spangled Banner" is difficult to sing. Others do not like the words. Some people have suggested that the United States change its national song. They say many other songs that celebrate America would be better.

One of these is called "America." It is also known as "My Country 'Tis of Thee." Samuel Smith wrote it in 1832. The music is the same as the British national song, "God Save the Queen." The Southwestern Christian College Chorus sings "America."

Many people think "God Bless America" is the best song that celebrates America. Irving Berlin wrote it in 1917. It became popular twenty years later when Kate Smith sang it on a national radio broadcast. Listen now to the young voices of the American Boychoir as they perform "God Bless America."

Other people would like America's national song to be "This Land is Your Land." Woody Guthrie wrote the words in nineteen-forty. It became one of the most popular folk songs in America.

And that's American Mosaic for this week. Your announcers were Mary Tillotson and Steve Ember. Caty Weaver was the producer.

I'm June Simms. Thanks for stopping by and be sure to return next week for another American Mosaic from VOA Learning English.

We leave you with one more celebratory song. Kanye West, Jay-Z and Frank Ocean perform, "Made in America."