Update Required To play the media you will need to either update your browser to a recent version or update your Flash plugin.
By Gregory Stachel
16 August 2021


The Census Bureau found the U.S. became more diverse and more people live in cities over the past ten years. It found the white population dropped for the first time on record. The information will be used to reshape the nation's political maps.

The information offered the most detailed look at how the country has changed since 2010. It is sure to set off a battle between America's two political parties as the numbers will shape political elections for years to come. It will also help decide how $1.5 trillion in yearly spending is divided.

The white population of the United States fell from 63.7 percent in 2010 to 57.8 percent in 2020, the lowest on record. The numbers show people continue to move to the South and West from the Midwest and Northeast. In California, Hispanics are now the largest racial group, growing to 39.4 percent from 37.6 percent in the last ten years. Also, in California, the white population fell from 40.1 percent to 34.7 percent. 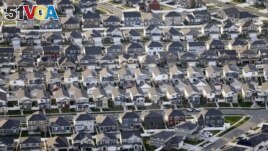 FILE - Rows of homes are shown outside Salt Lake City, April 13, 2019. The numbers show people continue to move to the South and West from the Midwest and Northeast. (AP Photo/Rick Bowmer, File)

Nicholas Jones is a Census Bureau official. He said, "The U.S. population is much more multiracial and much more racially and ethnically diverse than what we have measured in the past."

Back in April, the Census Bureau released state population totals from the 2020 census showing how many congressional seats each state gets.

The release offers states the first chance to reshape their political districts, which must be done after a census to reflect population changes. Some states will lose members of the House of Representatives, and other states will gain them. The process is expected to be a battle since it means control over Congress and statehouses. It also provides the first chance to see if the counting was well done. Many considered the count the most difficult in recent memory.

Even before it began, the Trump administration wanted to add a citizenship question to the count form. Critics said it would create fear and decrease immigrant or Hispanic participation. The effort was stopped by the Supreme Court.

Terry Ao Minnis is an official with Asian Americans Advancing Justice, a support group. She said, "the pandemic played a big role, but we can't forget the political interference we saw." She said it was clear that this affected if people took part in the count. For example, some people may have not opened their door because of COVID or of fear of a government official.

The census information was supposed to be released in March, but the date was pushed back because of the coronavirus pandemic.

Thursday's release permits researchers to check the count before it will release a study showing undercounts and overcounts next year. Communities of color have been undercounted in the past, and this could lead to court cases saying the numbers are wrong. The Census Bureau has a program that permits elected officials to challenge the numbers, but it does not apply to changing the districts or the seats in Congress.

Thomas Saenz is president of the Mexican American Legal Defense and Education Fund (MALDEF). He said, "There is always an undercount." But he said their concern is making sure they are not as large as previous counts.

Mike Schneider reported this story for Voice of America. Gregory Stachel adapted it for VOA Learning English. Susan Shand was the editor.

district – n. an area or section of a country, city, or town: such as an area established by a government for official government business

participate – v. to be involved with others in doing something: to take part in an activity or event with others

geography – n. an area of study that deals with the location of countries, cities, rivers, mountains, or lakes