Update Required To play the media you will need to either update your browser to a recent version or update your Flash plugin.
By Mario Ritter
17 June, 2016


Central banks in two of the world's largest economies – the United States and Japan -- left interest rates unchanged this week.

In the United States, the Federal Reserve left the main interest rates it controls at their current levels.

"Today, the Federal Open Market Committee maintained the target range for the federal funds rate at one-quarter to one-half percent."

Yellen said the Federal Reserve System, called the Fed for short, will use care when making decisions.

She added that the central bank will make small changes, when necessary, to improve economic policy.

She noted that U.S. employment and economic growth numbers have not met the Fed's expectations. But she warned against short-term judgements.

"Although recent market data have been on balance disappointing, it's important not to overreact to one or two monthly readings."

But others say the Fed could raise interest rates not once, but twice later this year. However, the U.S. presidential election could make the decision more difficult.

Ken Simonson is with the National Association for Business Economics. He says any move to change rates before the election could be criticized as an attempt to influence the vote. 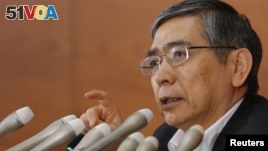 Japan also leaves interest rates where they are

In Japan, stock prices went down on Thursday while the value of Japanese money against the U.S. dollar went up.

The bank inaction was widely expected. However, the rising exchange value of the yen against the dollar this year was not.

Concerns about Britain possibly withdrawing from the European Union have caused the yen to strengthen on international currency exchanges.

On Friday, the Japanese yen closed at more than 104 yen to the dollar in Asian trading. That is its highest level since 2014.

A government spokesman in Tokyo said officials are watching the currency market. A high value for the yen can hurt Japanese exports, an important part of the country's economy.

Tobias Harris is vice president of the research group Teneo Intelligence. He said he does not think the government will take action to reduce the value of the yen. He said the U.S. presidential campaign also appears to be influencing the Japanese government.

Businessman Donald Trump, the likely candidate of the Republican Party, has criticized Japan's monetary policy. During the campaign, he accused Japan of keeping the value of the yen low to make its exports competitive in foreign markets.

Harris said, "The Abe administration will do whatever it can to talk down the yen; it will use other tools to boost demand." But, he added, "I don't think Tokyo will intervene before the U.S. presidential election."

The yen has increased in value by more than 13 percent against the dollar this year. It is also now trading on high levels with the British pound, the euro and the Australian dollar.

But experts say the Bank of Japan alone cannot get the economy going again.

Mil Arcega and Steve Herman reported this story for VOANews. Mario Ritter adapted it for Learning English. George Grow was the editor.

indicators – n. a sign or number that shows the condition or state of something

appropriate – adj. correct, the right choice for a purpose or situation