Update Required To play the media you will need to either update your browser to a recent version or update your Flash plugin.
By Christopher Jones-Cruise
15 April, 2015


Plants have a "biological clock" that tells them when to produce leaves, seeds and other growth. A new study says understanding that clock may help scientists develop crops that can feed a growing population in an increasingly warmer world.

Rob McClung is a scientist at Dartmouth College. He says scientists need to create ways to feed the nearly 10 billion people who will be living on Earth by the middle of the century.

He says estimates show that there will need to be an increase in the world food supply of about 50 to 60 percent in the next thirty-five years. 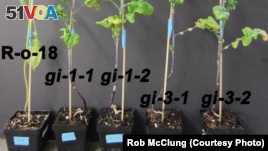 "And we're worried that the things that we've done to increase agricultural productivity may be becoming exhausted."

To find new ways to increase productivity, Mr. McClung examined the biological clocks of plants. He learned that different genes in plants affect the plant's clock.

He published his findings in the Proceedings of the National Academy of Sciences. He says he identified a gene called GIGANTEA in a common species of the plant called field mustard.

He discovered that the speed of the gene's development can affect when the plant produces. Mr. McClung says the gene also affects how the plant deals with extreme cold and high levels of salt.

"We want to be able to predict if you do this to the clock, you will do this to crop yield."

He says he hopes his research will give plant developers a molecular tool they can use to create a plant that can accept a higher level of salt or grow in a colder environment than usual.

"...we think that by manipulating the plant clock, we will be able to make plants that are better in tune with their environment and able to perform more effectively."

Experts say the current growth in the production of the world's major food crops -- corn, rice, wheat and soybeans -- will not be enough to feed the 9.5 billion people who will be living on Earth in 2050.

Rosanne Skirble reported this story from Washington. Christopher Jones-Cruise wrote it for VOA Learning English. Caty Weaver was the editor.

biological clock – n. a system that controls natural processes such as waking, sleeping and aging

yield – n. the amount of something that is produced by a plant or farm

manipulate – v. to use or change for a particular purpose

in tune with – (idiom; figurative) to be in agreement with someone or something

How would improved crop yields affect your country? We want to hear from you. Write your thoughts in the comments section.