Update Required To play the media you will need to either update your browser to a recent version or update your Flash plugin.
By VOA
24 September, 2016


Only 60 percent of students seeking a bachelor's degree at an American college or university finish their study program within six years.

That information comes from the United States Department of Education. It was part of a report released in May.

The report talks about full-time students who attended a four-year college or university for the first time in 2008. It states that 60 percent of them completed their degree program by 2014. 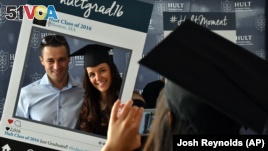 Experts say there are many reasons why this number is so low. But many schools are looking for ways to increase the graduation rate.

For example, every American college or university requires students to identify the main subject, or "major," of their studies. After all their requirements have been met, students receive their degree in that major.

Some universities require individuals to declare a major at the beginning of their studies. Other schools let students wait until their second year. Changing majors is also acceptable. But some experts argue against changing majors. They note it may cause students to take more time to complete their degree program.

However, a new study suggests that students who change their majors may be more likely to graduate.

The Education Advisory Board (EAB) released the report on the study last month. The board studies higher education and tries to help American colleges and universities make improvements.

The report also suggests that changing majors within the first three years of study has little to no effect on the average time it takes students to complete their degree.

The EAB's senior director Ed Venit wrote the report. He would not comment on whether or not college students should change majors. But he said that about 80 percent of students do change at some point.

Venit also said it is not completely clear why changing majors might help students. But he thinks some people become more invested in their studies once they have had time to decide what they truly want to do.

"Students who chose a major early on: maybe they didn't have full information about what they wanted to do. Maybe they just picked something that felt familiar ... or their parents pushed them to something, whatever it might be. But maybe they didn't make a full choice early on. ... Those students were only, perhaps ... just kind of attached to their major, versus students who either wait and explore a little bit longer or have declared something, explored further and found something else that they like even better."

Venit added that the Department of Education's graduation rate information is not completely correct. It only includes the rates for students studying for the first time -- not for those who have changed schools. These students represent about 40 percent of the university population across the United States.

The real six-year graduation rate is only between 53 and 55 percent, Venit said. He said that it is difficult to understand why the rate is so low. Some students leave school because of poor academic performance. Others leave because they lack the money to pay for their schooling. And others leave because they feel they are not getting enough in return for the high cost of higher education.

No matter the reason, Venit said, this is the biggest and most complex problem facing higher education.

Pete Musto reported on this story for VOA Learning English. George Grow was the editor. We want to hear from you. What is the college graduation rate of your country? Do schools in your country have special programs to help students graduate? Write to us in the Comments Section or on 51VOA.COM.

commit – v. to say that someone or something will definitely do something

associate's degree – n. a degree that is given to a student who has completed two years of study at a junior college, college, or university in the U.S.