33 Charged with Stealing Chocolate, Other Crimes

Update Required To play the media you will need to either update your browser to a recent version or update your Flash plugin.
By VOA
12 June, 2017


United States officials have accused 33 people of criminal activity, including stealing 4,500 kilograms of chocolate and a "murder for hire" plot.

Murder for hire is when someone offers to pay an individual to kill another person. 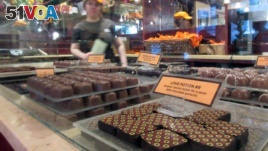 All those charged have ties to a Russian-organized crime group that operated throughout the United States, said Joon Kim. He is the acting U.S. attorney for the Southern District of New York.

William Sweeney Jr. is with the U.S. Federal Bureau of Investigation. He said that the 33 people charged in the case tried "to make as much money as possible, all allegedly organized and run by a man who promised to protect them."

"But that protection didn't include escaping justice," Sweeney added.

Kim said the 33 defendants are accused of what he called a "dizzying" number of crimes. He said the Russian criminal group is known as Shulaya Enterprises.

The charges include stealing a shipment of 4,500 kilograms of chocolate. That is equal to over 80,000 candy bars.

Another reported crime involved a female member of Shulaya Enterprises. She would "seduce" men, suggesting a love interest, and then use a gas to put them to sleep -- before stealing their money.

The "murder for hire" effort, the government said, involved an offer to kill someone in exchange for money.

Other crimes were transportation and sale of untaxed cigarettes, plans to pay bribes to law enforcement officials and efforts to cheat casinos in New Jersey and Pennsylvania.

The casino fraud case involved the use of electronics and computers to predict when and which electronic slot machines would pay off prize money, the government said.

Shulaya Enterprises members used code words to communicate to each other -- to make it more difficult for the government to listen to their discussions, the government said.

The defendants were mostly born in the former Soviet Union and had strong ties to Ukraine, Georgia and Russia, the government said.

Acting U.S. Attorney Kim said the crimes were carried out throughout the United States.

In the American justice system, a judge or jury of people decide if a defendant charged with a crime is guilty or not guilty. If the person is found guilty, a judge will decide what the punishment will be, including time in prison and financial fines.

chocolate - n. a food that is made from cacao beans and that is eaten as candy or used as a flavoring ingredient in other sweet foods

dizzying - adj. such a large number as to be difficult to understand

seduce - v. to persuade someone to have sex with you

bribes - n. payments to convince someone in law enforcement or government to do a favor

defraud - v. to trick or cheat someone or something in order to get money

slot machines - n. machine used for gambling that starts when you put coins into it and pull a handle or press a button

code - n. a system of signs used to represent words or numbers

bar – n. a solid piece or block of something