Update Required To play the media you will need to either update your browser to a recent version or update your Flash plugin.
By Mario Ritter
27 June, 2017


Brazil's President Michel Temer calls the corruption charges against him a "soap opera" and accuses the country's top lawyer of seeking "revenge."

On Monday, Attorney General Rodrigo Janot charged Temer with accepting at least $150,000 dollars in payments. The payments are said to have come from the head of Brazil's huge meat producing company JBS earlier this year.

Reports say there is an audio recording of Temer reportedly plotting to pay money to a former house speaker and a Temer associate who was jailed for corruption. And Janot is considering other charges against Temer including obstruction of justice. 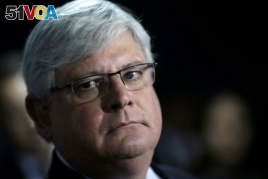 After the attorney general's charges, a complex process involving the nation's highest court and congress could lead to a vote by the full lower house.

The lower house of Brazil's Congress called the Chamber of Deputies could decide whether to suspend Temer or try him on charges of bribery.

Two-thirds of the 513-member group must agree to do so.

If Temer is found guilty, he faces a $3 million fine and two to 12 years in prison. But observers think Congress will not force him out.

Sonia Fleury is a political science professor at the Fundacao Getulio Vargas University in Rio de Janeiro. She says, "Several senators and deputies are in the same boat as he is, being accused in the same way." Fleury adds they are protecting each other "to avoid prosecution."

The Brazil's president has denied the charges and says that he will not step down. Public opinion studies show Temer has a very low rate of approval of seven percent.

South America's largest economy is recovering from a deep recession. Unemployment and inflation remain high while economic growth has not been strong.

The government has proposed unpopular reforms to the country's finances including cutting payments to retired workers and labor reforms.

Peter Hakim is the former president of the Inter-American Dialogue, a research group based in Washington. He says the charges against Temer make it difficult for lawmakers to vote on financial reforms and cuts to public spending.

"There may have been enough votes for him to secure the economic reforms necessary but now people have to vote for unpopular reforms and for a unpopular defense of Temer."

Kenneth Schwartz, Victor Beattie reported this story for VOA News with additional materials from AP and Reuters. Mario Ritter adapted it for VOA Learning English. Hai Do was the editor.

soap opera –n. a kind of dramatic television or radio program of continuing stories of the daily lives of a group of people

revenge –n. the act of hurting someone because they hurt you first

bribery –n. to receive an illegal payment in return for supporting a public law or policy

obstruction –n. to block something from going forward

prosecution –n. the process of facing charges in a legal court