Update Required To play the media you will need to either update your browser to a recent version or update your Flash plugin.
By Caty Weaver
20 November, 2017


Charles Manson, one of the most infamous killers in U.S. history, died Sunday at the age of 83. He had spent the last 45 years in prison.

The California Department of Corrections and Rehabilitation said Manson died of natural causes at a hospital in Kern County.

Manson led a small cult group and persuaded his followers to carry out murders of powerful people in the Los Angeles area in 1969. Manson and six of his followers were sent to prison in 1971. Three additional followers were later jailed for crimes linked to Manson.

Manson's most well-known victim was the American actor Sharon Tate. She was 26 years old and eight and a half months pregnant when the Manson group stabbed her to death at her home. Her husband, film director Roman Polanski, was not home at the time. 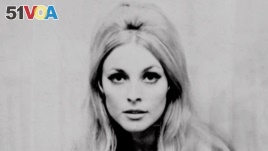 Actress Sharon Tate is shown in this undated photo. Tate, who starred in television and film roles, was identified by police as one of five victims found slain in her Benedict Canyon estate Aug. 9, 1969 in California. (AP Photo)

Also killed at their house that night were three of Tate's friends as well as a friend of the caretaker of the house. The attack included stabbing, shooting, and hanging. The murderers also wrote the word "pig" in blood on the front door.

The following night, six members of the Manson gang broke into the home of a wealthy supermarket official. They killed the official, Leno LaBianca, and his wife, Rosemary. The murders there were equally vicious and included messages written in the victims' blood.

Investigators did not connect the two sets of murders until weeks later.

Manson was born to a single mother in Cincinnati, Ohio, in 1934. He never knew the identity of his father. His mother was severely neglectful.

Manson spent most of his life in detention. He started in his teenage years with sentences for armed robbery and other crimes.

As an adult, Manson was usually unemployed and only partly literate. In the mid-1960s he became the leader of a small cult known as the Manson Family, whom he led to commit the murders of August 1969.

Manson claimed to be influenced by the Beatles' song "Helter Skelter." He said he believed the song was about a race war. He said he ordered the murders to cause that race war to start. The Manson family believed blacks would defeat whites in such a war but fail to lead themselves after. The family believed that the victors would ask Charles Manson to lead them.

Law enforcement officials used fingerprints to identify the Manson group members as the attackers. Manson and his followers went to trial the following year. When he was not permitted to serve as his own lawyer Manson carved an "X" on his face in protest. His followers did the same soon after.

Manson later changed the "X" on his face to a swastika, the symbol of the Nazi Party of Germany.

Manson and his followers were found guilty and sentenced to death in 1971. However, the state of California banned punishment of death the following year.

Most of the Manson family members have remained behind bars through many parole hearings. Manson himself had been denied parole 12 times.

Manson's death leaves five members of the Manson Family still in prison: Robert Beausoleil, Bruce Davis, Charles "Tex" Watson, Leslie Van Houten, and Patricia Krenwinkel. All are serving life sentences and are in their 60s and 70s. A sixth member, Susan Atkins, died in prison of brain cancer in 2009.

At least three other Manson group members have been paroled after serving time for crimes linked to Manson.

Lynette "Squeaky" Fromme was paroled in 2009 after serving 33 years for a murder attempt against American President Gerald Ford.

Sandra Good was paroled in 1985 after serving nine years for sending threatening letters to more than 150 corporate executives. And Steve Grogan, convicted for helping Manson and Davis kill a ranch hand in 1969, also was paroled in 1985. He drew a map that helped investigators find the body of the victim, eight years after the murder.

We want to hear from you. Write to us in the Comments Section

cult - n. a small religious group that is not part of a larger and more accepted religion and that has beliefs regarded by many people as extreme or dangerous

neglectful - adj. not giving enough care or attention to someone or something

symbol - n. a letter, group of letters, character, or picture that is used instead of a word or group of words

ranch hand - n. a temporary worker on a farm