Update Required To play the media you will need to either update your browser to a recent version or update your Flash plugin.
By Jim Dresbach
07 January, 2016


French police shot and killed a man as he sought to attack a police station Thursday.

The incident took place on the one-year anniversary of the attack on the offices of Charlie Hebdo magazine by Islamic extremists.

The police shooting happened in northern Paris. The man carried a knife and appeared to be wearing an explosives vest. 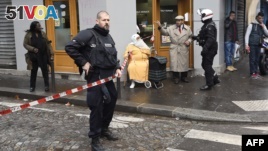 French police patrol near the Boulevard de Barbes in the north of Paris on Jan. 7, 2016, after police shot a man dead as he was trying to enter a police station in the nearby Rue de la Goutte d'Or.

French officials say the man was thought to have shouted "Allah Akbar" (God is great) before police shot him. Police were reported as saying the vest contained no explosives.

News of the shooting came after French President Francois Hollande announced new security guidelines for armed police. He also remembered and honored the three officers who died in the Charlie Hebdo attacks.

Two French-born brothers killed 11 people inside the magazine's office on January 7, 2015. A police officer was shot and killed outside the office. A Jewish grocery store was also attacked on that day. A total of 17 people were killed.

Hollande's comments were made at a ceremony at Paris' police headquarters. The president honored the officers killed while protecting French citizens one year ago. He also praised the country's security forces. Many are now deployed around schools, airports and other public places to defend against terror attacks.

France remains under a state of emergency following the November 2015 attacks in Paris and its suburbs.

Information for this report came from VOAnews and the Associated Press. Jim Dresbach adapted the story for Learning English. George Grow was the editor.

vest – n. a special piece of clothing that you wear on your upper body

suburbs – n. a town or other area where people live in houses near a larger city