Is Cheetah Fast Enough to Survive?

Update Required To play the media you will need to either update your browser to a recent version or update your Flash plugin.
By VOA
19 October, 2014

Just about everyone knows that cheetahs are fast. Some studies have measured their speed at about 95 kilometers an hour over distances of about 366 meters. So it seems reasonable that all that sprinting would rob the wild cheetah of some of its energy. It seems that all that exercise would make the big, spotted cat a likely target of attack. But until recently no one ever really measured how much energy a cheetah uses up.

John Wilson took part in the cheetah research. He says cheetahs can easily deal with those energy outbursts.

"Like any cat, basically, they rest for most of the day. And they have only brief periods of activity. So, for example, a cheetah would only hunt in the morning for a few hours – in the afternoon for a few hours. We assume they expend a lot of energy during these chases. They offset those high-energy expenditures by resting for most of the day. So these blistering speeds that they run for short periods do not really have an effect on the cheetahs over the entire day."

But if the cheetahs are not out of breath or weak after the chase, what causes their population to decrease? Some experts say other predators, like lions or hyenas, might be stealing most of the cheetahs' food after they make a kill.

Dr. Wilson said the new study found that is not really what happens. 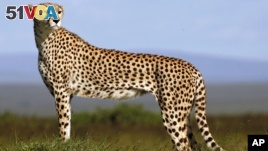 A cheetah on the plains of Masai Mara game reserve, Kenya.

"Our study has found that that's actually not really the case. Cheetahs lose about 12 percent of the food. So while they lose quite a bit of their food, cheetahs are pretty fast eaters. So, they've eaten a lot of that food before they use that food. The act of losing food is not that significant."

It appears that the cheetah is vulnerable to attacks by other animals because of its physiology -- the way its body operates. The cat simply burns a lot of calories -- the energy produced by food.

"Because these cheetahs have a fast metabolism – they have huge lungs and a strong heart -- their resting metabolic rate is really high. So just the act of walking already for a cheetah is pretty expensive. And then the longer they look for food, the more energy they need to invest in finding the food."

And, he says, that is the problem. It takes a lot longer for cheetahs to find animals they can catch and eat. And they have to walk a lot farther to do so. Mr. Wilson says that is because they naturally avoid people.

But human beings are increasingly occupying the areas where cheetahs traditionally look for food. Houses and fences block them from searching for animals to attack. Cheetahs use up a lot of energy to get around these barriers.

Mr. Wilson says that while this has not affected the number of cheetah cubs being born, it can affect their survival. He remembers seeing a female cheetah in a desert.

He says people are also killing the animals that cheetahs hunt. People also capture and sell cheetahs in the Middle East as pets. However, the wildlife group Born Free USA says up to 70 percent of the cheetah cubs illegally transported through East Africa die.

Earlier this year, the group called on members of the CITES treaty, Convention on International Trade in Endangered Species, to increase enforcement at borders and to improve laws and rules.

Mr. Wilson says there are no easy solutions to help cheetahs deal with human activity, but fast action is needed. He says there is a 10 percent chance that the animals could disappear forever within 100 years.

The U.S. Fish and Wildlife Service lists cheetahs as an Endangered Species. And the International Union for Conservation of Nature describes the cats as vulnerable.

spotted - adj. marked with spots, which are small areas of a surface that are different from other areas

outburst - n. a surge of activity or growth

vulnerable - adj. capable of being physically or emotionally wounded

physiology - n. a science that deals with the way things function

Now it's your turn to use these Words in this Story. In the comments section, write a sentence using one of these words, and we will be provide feedback on your use of vocabulary and grammar.