Cheetahs Once Again Live in India After 70 Years

Update Required To play the media you will need to either update your browser to a recent version or update your Flash plugin.
By Dan Friedell
23 September 2022


For the first time since 1952, wild cheetahs are living in India.

Eight of the big cats arrived Saturday from the southern African nation of Namibia.

They are part of a reintroduction program and will live in a large open space. Cheetahs once lived in India, but died out about 70 years ago. Scientists hope the cats will learn to hunt deer and other wild animals in the area. And they hope the cheetahs will reproduce. 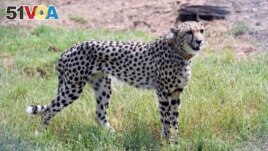 The cheetahs coming to Africa are slightly different from the Asian ones which were widespread in India. Those died out due to hunting and human population growth. There are very few Asian cheetahs remaining, mostly in Iran.

Indian Prime Minister Narendra Modi released the cats into the wild on Saturday.

"When the cheetah will run again ... grasslands will be restored, biodiversity will increase and eco-tourism will get a boost," Modi said.

Nature experts hope that as more people learn about the cheetahs in India, they will be interested in working to save the grasslands on which they live.

In many countries, the places where cheetahs live are getting smaller and smaller due to human population growth and climate change. Cheetahs once lived throughout Africa, Asia and the Middle East, but now, however, they live on just 9 percent of that original land.

There are about 7,000 adult cheetahs in the world.

Laurie Marker is a researcher with the Cheetah Conservation Fund. She said she hopes the cheetahs can find an "appropriate" home in India. If they survive, spread out and have babies, the area where they live could support 21 cheetahs.

"To save cheetahs from extinction, we need to create permanent places for them on earth," Marker said.

In South Africa, however, cheetahs are running out of space. So groups such as Marker's are looking for new cheetah homes.

Four cheetahs recently captured in South Africa were sent to the East African country of Mozambique. Twelve cheetahs from South Africa are currently waiting to be sent to India's Kuno National Park.

While many are celebrating the cheetah relocation project, others think it is too early in the project to form an opinion.

Mayuk Chatterjee is with the International Union for Conservation of Nature. He said there could be "unintended" effects of the move. "The question remains: How well it's done."

One concern is how the cheetahs will affect other animals such as hyenas, a kind of wild dog, or birds. Another is what will happen if the cheetahs do too well. People in India are currently worried about tigers. A fast rise in the population of the large cats has led to more tiger-human interactions.

The cheetahs from Namibia will wear tracking devices around their necks. They will start off in a smaller safe area for one month before they are released to a larger area. They will be living in the same area as deer and antelope. Scientists hope the cheetahs will learn how to hunt them. Other predators, such as bears and leopards, will not be able to get into the area.

The project is expected to cost more than $11 million. It includes relocating a small village on the edge of the cheetah area. About $6 million of the cost will be paid by state-run Indian Oil.

The African cheetahs are distant family members of the cheetahs that once lived in Asia. Early on, the hope was to bring in Asiatic cheetahs, but there are too few.

There are still concerns about whether the project will work. One expert thinks it would be better to work on saving the cheetahs where they live.

Pamela Burger studies conservation genetics at the University of Veterinary Medicine in Austria. She calls the future of the cheetahs in India "questionable" and says, "it would be better to conserve them now where they are..."

But another researcher, Adrian Tordiffe, said it has not been easy to keep the African cheetahs safe, and sometimes they need help to get to places where they can live more easily.

Tordiffe is an animal doctor and wildlife specialist who worked on the cheetah relocation project. He said India has shown an ability to keep large cats safe because of strong conservation laws. For example, the population of tigers has increased by almost 100 percent in the last 15 years.

"We cannot sit back and hope that species like the cheetah will survive on their own without our help," he said.

reintroduction –adj. the act of returning something to where it once was

biodiversity –n. the existence of many different types of plants or animals in an area

ecotourism –n. the practice of traveling to beautiful or natural places for pleasure, in a way that does not hurt the environment there

boost –v. to increase the power or force of something

appropriate –adj. right or suited for a purpose or situation

extinction –n. the result when something has died out completely

relocation –n. to move something to a new place

unintended –adj. not expected or not done on purpose

predator –n. an animal that hunts and eats other animals

conservation –n. the act of taking care of plants and animals or the environment

species –n. a group of animals that are similar and can produce young