Update Required To play the media you will need to either update your browser to a recent version or update your Flash plugin.
By VOA
23 March, 2016

The West Potomac Park in Washington, DC, lies just west of the National Mall. It is home to some of Washington's most iconic sites, like the Jefferson Memorial, the Martin Luther King, Jr. Memorial, and the Tidal Basin.

But, the park's most famous attraction? Cherry blossoms.

Thousands of cherry trees bloom around the waters of the Tidal Basin, which reflect the trees' images. The basin was created in the late 1800s to prevent the Potomac River from flooding. 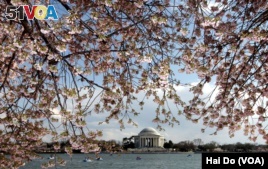 The cherry blossoms around the Tidal Basin

These pink and white flowers serve as a symbol of international friendship. The original cherry trees were a gift from Japan.

On March 26, 1912, more than 3,000 cherry trees arrived in Washington. Most were planted around the Tidal Basin. But cherry trees were also planted near the Washington Monument and the White House.

The cherry blossoms also serve as a symbol of the beginning of springtime. The trees burst with colors of soft pink and white.

"The blossoming of the cherry blossoms every spring is sort of the great springtime celebration, not only in the District of Columbia but throughout the United States."

Every year, Washington celebrates the arrival of spring with a two-week Cherry Blossom Festival. More than 1.5 million people from around the world visit the nation's capital during the festival. They all hope to see the cherry trees at their "peak bloom."

Park officials define "peak bloom" as the period when 70 percent of Washington's most common cherry tree variety -- the Yoshino trees -- are blooming. Yoshino cherry trees are one of 12 types of cherry trees in Washington. Peak bloom lasts several days each year.

Experts begin making peak bloom predictions in February. Visitors make their travel plans to Washington based on these predictions.

But this year, unpredictable weather in March in Washington has made guessing the "peak bloom" difficult. "Peak bloom" dates have changed many times.

"We use a combination of natural indicators - we look at the trees, what are the trees telling us - we look at the historic record, but primarily what we are looking at is the forecast temperatures as we go from February and into March. This year the forecasts were sort of all over the place, which caused us to change considerably."

Carl Feasley and his family visited the Tidal Basin one day before the 2016 peak bloom was set to begin on March 23. It was his first time to see the cherry blossoms.

"We're coming from Buffalo, New York, where it's been winter for, even a mild winter this year, but winter for the past 5 months or so, or so it seems. It's just nice to be out in the sunshine and see evidence of spring all over."

Virginia Walsh is a Washington, DC local. She said she comes down to the Tidal Basin several times every spring to enjoy the cherry blossoms.

"I always try to come early, the peak, and then a couple days later. It's normally three times a year. I just love this place."

The cherry blossoms may signal the start of spring in Washington. But they have also become a worldwide symbol of Washington itself.

Bo Wen moved to Washington from China seven years ago. He comes to the Tidal Basin every year during the Cherry Blossom Festival.

festival - n. a special time or event when people gather to celebrate something

peak - adj. at the highest point or level

bloom - n. a time period in which a plant has many open flowers

unpredictable - adj. not capable of being known before happening

indicator - n. a sign that shows the condition or existence of something

all over the place (idiomatic) - not well organized or carefully considered

considerably - adv. by a large amount or to a large extent; greatly.