Blue Crabs: A Messy Meal from the Chesapeake Bay

Update Required To play the media you will need to either update your browser to a recent version or update your Flash plugin.
By Pete Musto
25 August, 2017


What have ten legs, two of them large claws, a hard shell cover, and live in oceans, fresh water, and on land? Crabs, of course!

There are thousands of different kinds of crabs all over the world. They can be as small as a few millimeters across or grow as big as 4 meters. And all play an important part in the environments in which they live.

Crabs may look strange. But many people also find them delicious. The blue crab is an especially popular crab for eating in the United States. These crabs can grow up to about 23 centimeters and they get their name from the blue coloring on the legs and claws.

Blue crabs live in the waters of the western Atlantic Ocean, and in the Gulf of Mexico. However, one place in America is especially famous for its blue crabs: the Chesapeake Bay. This largest U.S. estuary borders Maryland and Virginia.

Both states have long made use of the Chesapeake for food, transportation, and fun. All around the area you can see images of the blue crab on clothing, advertisements, cars, and in restaurant windows.

Scientists in Maryland and Virginia say the bay holds hundreds of millions of blue crabs. From early spring through much of fall thousands of people hit the water to capture some of these creatures.

Pete White works with Captain White's Seafood City in Washington, D.C. The family-owned business gathers crabs and other seafood from the bay and sells it at its store right along the Potomac River. White told VOA that his family has been in the business for about 100 years. He is a big fan of Chesapeake blue crabs.

"[These] are the best crabs, in my opinion, out of all the country," White said. "I get a lot of people coming from Pennsylvania ... a lot of people out of Jersey, New York, North Carolina. ... They come from Georgia and they take them home on their car ride." 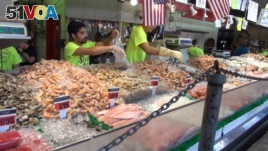 White said blue crabs are special because of their sweet meat.

There are many ways to cook blue crabs. Some people like to grill them, while others make crab soup. But the cooking style most traditional to the area is steaming.

The first step, White explained, is to combine water or beer with vinegar in a large, metal container. Then, White adds "Old Bay."

Old Bay is a seasoning product of hot and salty spices. It was created in Baltimore, Maryland in 1939.

Then you turn on the heat and wait for the liquid to boil.

The crabs are always cooked alive. But, White suggested, they should not touch the water directly. They normally are placed flat on a rack just above the water. Old Bay can be added to each layer of crabs.

It takes 20 to 30 minutes for the steam from the boiling liquid to cook the crabs. Then, they are removed from the container. And White said, they can be mixed with more Old Bay.

Cooking crabs is fairly easy. But eating them can be a challenge. The shells are still very hard. Some people use special tools called crackers and mallets to crack the shells and reach the meat. Other use their hands, breaking at weak points of the shell. Either way, it is a messy meal that usually leaves the eaters covered in shell, bits of meat and lots of red seasoning.

Each blue crab only has between about 60 and 100 grams of meat in them. So sellers most often sell them by the bushel, meaning in groups of about 60 to 100. People usually buy them when they are feeding a lot of people. The so-called crab feast has become a summer tradition in the Chesapeake region.

Kate Livie knows a lot about crab feasts. She is the director of education at the Chesapeake Bay Maritime Museum in St. Michaels, Maryland.

Livie says that close access to the Bay and its resources have always been important to people. Native Americans such as the Powhatan, the Piscataway and the Nanticoke lived in the area long before Europeans arrived in the 1500s. Scientists have found evidence that these Native Americans enjoyed crabs as well as other seafood, such as oysters.

In fact, oysters were the main seafood of choice from the Chesapeake for many early years, Livie says. But improvements in food preservation, especially in keeping it cold, changed everything for the crab market in the warm summer months.

"Although [blue crabs] were [eaten] through the 17th and 18th century, you couldn't sell more than you could eat in a day," she told VOA via Skype. "So food preservation [technology] and transportation turned crabs from, kind of, free but priceless, into an incredibly successful and economically [important] harvest."

There was also improvement in the crabbing industry. A local fisherman invented a trap for crabs in the 1920s. The trap, called a crab pot, made it easier to catch the animals.

Plus, Livie says, Old Bay and some advertising campaigns helped grow the crab market. And she she says the blue crab became a major part of the Maryland identity.

However, the blue crab has weathered some stormy seas. Bruce Vogt is a manager of the Chesapeake Bay office of the National Oceanic and Atmospheric Administration, or NOAA.

He says that pollution and other problems have had a serious effect on the health of the bay and its crabs. In fact, in 2008 scientists reported that the blue crab came very close to disappearing from the Chesapeake completely.

But efforts that began in the 1970s to improve the Chesapeake's conditions continue, Vogt says. And this year, researchers estimated there were 254 million female blue crabs in the bay, the largest population since 1990.

Vogt argues that people who love crabs cannot simply hope they will always be there. He says people must work to guarantee their survival. That is why experts push for conservation action, including limiting the harvest of females to about 25 percent.

"There's obviously a lot of work to do," Vogt told VOA via Skype. "We can't just sit back and expect that everything is going well now and we'll have crabs in the future."

Pete Musto reported this story for VOA Learning English and produced the video. Caty Weaver was the editor. We want to hear from you. What kinds of seafood do people eat in your country? How do they prepare that seafood? Write to us in the Comments Section or on 51VOA.COM.

claw(s) – n. a sharp curved body part of an animal, such as a lobster or crab, that is used for gripping and holding things

grill – v. to cook food on a metal frame over fire

steam(ing) – v. cook, heat, or treat (something) with the hot gas that is created when water is boiled

vinegar – n. a liquid with an acid taste that is used to flavor or preserve foods or to clean things

spice(s) – n. a substance, such as pepper or nutmeg, that is used in cooking to add flavor to food and that comes from a dried plant and is usually a powder or seed

rack – n. a frame or stand on which you place things

mallet(s) – n. a tool with a large usually wooden head that is connected to a part that is easy for a hand to hold

messy – adj. not clean or tidy

oyster(s) – n. a type of shellfish that has a rough shell with two parts and that is eaten both cooked and raw