Update Required To play the media you will need to either update your browser to a recent version or update your Flash plugin.
By Dan Friedell
23 May, 2016

Since Facebook Live became a part of Facebook earlier this spring, some people and broadcasters have been making videos.

There are many live videos each day. Some show people test-driving cars. Others show people how to do exercise routines or yoga poses.

Back in April, the website Buzzfeed produced a live Facebook video showing two employees trying to see how many rubber bands they could put on a watermelon before it exploded.

Once a video ends, it stays on the Facebook user's page. Until recently, the watermelon video was the all-time leader in Facebook Live views, with about 10 million. 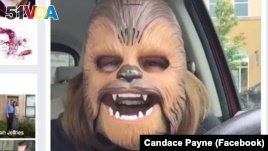 Candace Payne of Texas recorded this video of herself showing off her Chewbacca mask. It is now the most popular Facebook Live video ever.

That is until 37-year-old Candace Payne of Texas posted a video last week from the front seat of her car. By Monday, it had over 135 million views.

Payne is unwrapping a box that says "Star Wars," but she is hiding the rest from the camera. She is laughing and giggling. She can barely get the words out.

At one point, she has trouble pronouncing "confiscate" because she is so excited to make the video showing off her new toy.

What could it be that has her so excited?

It turns out to be a Chewbacca mask from the "Star Wars" movies.

Chewbacca is a wookie who is the partner of Han Solo, the pilot of the Millennium Falcon space ship. He is tall and furry like a dog. Chewbacca does not talk, he just makes different kinds of noises. The noise he makes is somewhere between a roar and a moan.

The Chewbacca mask is not just any mask. It is a special mask that roars when the person wearing it moves her mouth.

Payne tries it on and makes Chewbacca noises with the mask. She is having so much fun. She cannot stop laughing! She says "Oh, I'm such a happy Chewbacca!" and keeps laughing.

The video lasts just over four minutes. She ends by saying, "That is the best birthday present ever to myself. Wow!"

Why did Payne's video get so many views? A few people tried to explain.

One columnist for Slate.com says "it is impossible to watch the video without smiling." She also says Payne's video is special compared to other internet videos because she is not complaining about something.

Another viewer wrote, "Her laugh is so contagious! I love her personality! We gotta have more people like her in this world."

Apparently the mask is now sold out at most stores because of the video's popularity.

Did you enjoy the video of the woman with the Chewbacca mask? We want to know, why? Write to us in the Comments Section or on 51VOA.COM.

roar – v. to make the loud sound of a wild animal

moan – v. to make a long, low sound because of pain, unhappiness, or physical pleasure

confiscate – v. to take (something) away from someone especially as punishment or to enforce the law or rules

giggle – v. to laugh in a nervous or childlike way

routine – n. a series of things that are repeated; a regular way of doing things

pose – n. the position in which someone stands, sits, lies down, etc., especially as a model for a photograph, painting, etc.