Update Required To play the media you will need to either update your browser to a recent version or update your Flash plugin.
By Dan Friedell
30 August, 2017

There have been a lot of stories about people being rescued from flooded homes in and around Houston, Texas.

Houston is the fourth-largest city in the United States. The area has received over 120 centimeters of rain in just a few days. Many Houston neighborhoods are flooded.

Many people decided to wait out Hurricane Harvey when it first hit southeast Texas on Friday. But after so much rain, they found the water had entered their homes and they needed to leave.

That is what happened on Monday to J.C. Spencer and his wife Karen, who live in north Houston.

"We had to get out of there," J.C. Spencer told the television show Good Morning America.

With local police and fire department crews overwhelmed with life-saving efforts, some Houston residents had trouble getting help.

Some people said telephone calls to 9-1-1, the number U.S. residents call when they are in danger, were going unanswered.

The Los Angeles Times newspaper reported that some Houston residents calling 9-1-1 found out their call would not be answered for over two hours.

The Spencers had another idea. They called a restaurant where they often had dinner. 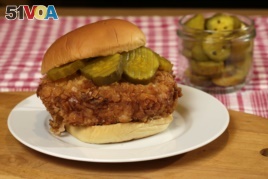 A fried chicken sandwich similar to what one might buy at Chick-fil-A.

The restaurant is Chick-fil-A, an eatery known for both its chicken sandwiches and friendly workers.

When the Spencers explained their problem, the store's manager sent her husband to their house on a boat.

J.C. Spencer said the phone call went like this: "I called Chick-fil-A, now that sounds kind of funny," he said. "I ordered two grilled chicken burritos with extra egg and a boat."

The Spencers loaded their belongings onto the boat, but there was not enough room for them to get in. Next thing they knew, two more people riding Jet Skis arrived to help. A Jet Ski travels on water like a small boat, but moves fast, like a motorcycle.

The Spencers got on the Jet Skis and were taken to a safe place. They said they were "grateful" for the help.

A number of people reacted to the story on Twitter. One wrote: "don't forget to give that manager a raise!"

Another called it "the best story of the day."

Dan Friedell wrote this story for VOA Learning English based on reports by ABC News and the Los Angeles Times. George Grow was the editor.

What do you think about the chicken restaurant sending a boat? We want to know. Write to us in the Comments Section or on 51VOA.COM.

overwhelm – v. to cause (someone) to have too many things to deal with

manager – n. someone who is in charge of a business or office

grill – v. to cook food on a metal frame over a fire

burrito – n. a Mexican food that consists of a flour tortilla that is rolled or folded around a filling (such as meat, beans, and cheese)

raise – n. an increase in the amount of your pay