Update Required To play the media you will need to either update your browser to a recent version or update your Flash plugin.
By VOA
15 November, 2012

On our show this week, we play music from a new boy band and an old one.

We also tell about the increasing number of Chinese students in the United States...

But first, we look at and through the glass work of Dale Chihuly. A 1982 work by Dale Chihuly
Art of Glass

Dale Chihuly says he knew he wanted to be an artist from the time he blew his first glass bubble. That was in nineteen sixty-five -- in the early years of America's studio glass movement. The movement has helped turn glass from a useful industrial material into works of art.

The studio glass effort is in its fiftieth year now. Dale Chihuly is marking the anniversary with a show in Richmond, Virginia. Shirley Griffith tells about it.

The show is called "Chihuly at the Museum of Fine Arts." It takes up about ninety-three square meters of exhibition space.

Dale Chihuly's works can be extremely large. "Laguna Torcello," for example, is about twenty meters long and more than six meters wide. He made "Laguna Torcello" from fifteen hundred individual pieces of glass. The work was designed especially for the museum in Richmond and is being shown for the first time. "Laguna Torcello" is named after the oldest continuously populated island in Italy's Venetian Lagoon.

Dale Chihuly says the city of Venice is special to him. He worked for a time at a famous glass factory there and returned to the city many times.

"I'm inspired by anything that has to do Venice, which is my favorite place in the world."

Native American blankets and baskets also inspire the artist. The museum displays some of his collection of these objects. The Virginia Museum of Fine Arts also has the glass baskets that he created to look like real ones.

Dale Chihuly also finds ideas in nature for his glass sculptures. His work "Red Reeds" was placed in the museum's reflecting pool. Lights make it glow in the water at night. The artist says the glass itself is the strongest guiding force of his work.

"This material is so phenomenal, and with light. There are very few materials light goes through. When it does, it can be pretty amazing."

The extraordinary play of light is most evident in his famous "Persian Ceiling." It is made of a thousand colorful glass pieces. "Persian Ceiling" hangs over the heads of museum goers, with light coming from behind the object. Some people lie down on the floor for the best view.

Dale Chihuly is seventy-one years old, and has no plans to retire anytime soon. He works with his team at Chihuly Studio in the state of Washington, where he grew up. However, there will be an end to "Dale Chihuly at the Virginia Museum of Fine Arts." The show closes February tenth.

Chinese Students at Universities in America

The number of students from China studying in the United States has grown sharply in recent years. Economists say that is because of a growing middle class in China. More than four thousand Chinese students are attending schools in the Los Angeles area, including the University of Southern California.

Sun Wei is an environmental engineering student at USC. He says he has not met a lot of Americans because there are so many students from his own country. But he says there is a positive side to this.

"The benefit is when I arrived, it doesn't take much adjusting -- it's all Chinese," he says. But adjusting is not so easy for all students from China. An Ruopeng is a doctoral student at the Pardee RAND Graduate School in Santa Monica. He says being away from family is difficult for him and his wife.

"We are the only child in both families and, you know, when your parents got older they tend to miss you a lot and miss your grandson a lot."

But he says he has enjoyed experiencing a different culture.

Ferdinando Guerra is an economist with the Los Angeles County Economic Development Corporation. He says Chinese students put more than one hundred million dollars into the local economy last year. And he says they added more than four and a half billion dollars to the national economy.

"The number of Chinese students studying in the United States has almost tripled in the past decade and has more than quadrupled since nineteen ninety-five."

Jim Hosek is an economist at the RAND Corporation. He says China's strong economic growth is the main reason for the big increase.

"There are a lot of Chinese entrepreneurs, businessmen of all sorts, business leaders, who are simply wealthier today, and they can afford to send their sons and daughters abroad."

Li Jing received her doctorate in education from the University of Southern California. She says the way many Chinese students pay for their tuition as changed since she studied this subject in two thousand four. She says the majority of Chinese students received scholarships in the past. Now she says they pay their own way to come study in the United States.

"So, I think one of the trends we see with this generation is they're really thinking about how what they can learn here will help them when they go back to China -- it's not like they wanna move here permanently like previous generations of students wanted to."

One Direction and Aerosmith

This week we have new music from what is probably the hottest boy band on the planet: One Direction. We also play songs from a new album by the older, but still popular, "bad boys from Boston" -- Aerosmith. Christopher Cruise has our report. 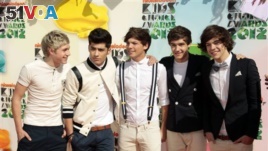 One Direction, from left, Niall Horan, Zayn Malik, Louis Tomlinson, Liam Payne, and Harry Styles at Nickelodeon's 25th Annual Kids' Choice Awards on March 31, 2012 in Los Angeles
One Direction's new record is called "Take me Home." The album will probably be on the Christmas wish lists of a lot of American girls. It has already sold hundreds of thousands of copies.

The group's first album, "Up All Night," sold one point three million copies in the United States since its release eight months ago. It is one of the top selling albums of the year.

Music critics like the new album. Rolling Stone magazine gave it three of a possible five stars. And, The Washington Post praised the five member British-Irish band for its skillful harmonizing and bouncy love songs, like "Last First Kiss."

The first single released from "Take Me Home" is "Live While We're Young."

"Music from Another Dimension" is the fifteenth studio album from Aerosmith. The group's first record came out in nineteen seventy-three. Today, the "bad boy" band's lead singer, Steve Tyler, is sixty-four. Lead guitarist Joe Perry is younger, at just sixty-two. Aerosmith performing in September
But can you tell that by their sound? Listen to this song, "Oh Yeah," on "Music from Another Dimension."

Aerosmith sounds to us as fresh and young as it did in nineteen seventy-five on the hit single "Sweet Emotion."
Related Articles
go top