Update Required To play the media you will need to either update your browser to a recent version or update your Flash plugin.
By VOA
November 11, 2014

Death rates of young children have dropped to record lows in developing countries. Experts say there are two main reasons for the decrease. They are improved government action, and simple protective health measures. Experts say the two have helped narrow the death rates between the richest and the poorest families.

The United Nations says 12.7 million children under the age of five died in 1990. By comparison, U.N. officials say about 6.3 million young children died last year. That is a huge drop, but still represents about 17,000 deaths every day.

Eran Bendavid is a population health expert at Stanford University in California. He credits simple things for the sharp drop in deaths among low and moderate-income countries. They include malarial bed nets and oral rehydration salts for treating diarrheal diseases. 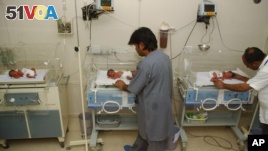 “The poorest of the poor – we’re talking about countries where the people live or $1 or $2 per day on average – have seen enormous declines in mortality. Their children are surviving at rates they have never seen before in those contexts.”

Eran Bendavid worked with other researchers at Stanford’s School of Medicine on a study. They used population and health studies to investigate child mortality rates in 54 countries. The research involved information about 1.2 million women in more than 929,000 families.

Eran Bendavid says that in countries with good governance, international aid can reach people who need it. But he found problems in corrupt or lawless nations. There, the number of child deaths increased during the same period.

“Now, if you have Boko Haram in northern Nigeria, if you have situations like you have now in Pakistan where aid workers are being vilified and attacked for providing vaccines, you know, where you have a governance that really has no ability to provide the basic conditions for public health to work, basic safety, the legitimacy for health workers to go and do what they need to do, then even those simple and basic and easy interventions can’t be accomplished.”

The study noted a major improvement in the child death rate between rich and poor in several countries. They include Bangladesh, Bolivia, Ivory Coast, Egypt and Ghana.

The findings were reported in the journal Pediatrics.

*This report was based on a story from VOA reporter Jessica Berman. George Grow wrote this story for VOA Learning English. Caty Weaver was the editor.

decrease – n. the act of becoming smaller or of making something smaller

simple – adj. easy to understand or do; not difficult or complex

drop – n. the act of something falling

Now it’s your turn to use these Words in this Story. In the comments section, write a sentence using one of these words and we will provide feedback on your use of vocabulary and grammar.