Update Required To play the media you will need to either update your browser to a recent version or update your Flash plugin.
By VOA
02 October, 2013

Hello, again, and welcome. I'm Jim Tedder in Washington. Have you ever heard anyone say, "I hate listening to the news. It's always bad!" Well, today we are happy to tell you that the news is good.

Three agencies concerned with world health have announced good news. Their joint report says worldwide deaths among children under age five is almost half that of 22 years ago. We'll have the details.

Then we will hear about a law professor from Iraqi Kurdistan who recently visited some of the best law schools in the United States. We find out what he learned, and what ideas he took home with him. Those are the two main topics of conversation today as you learn English with As It Is on VOA.

Elizabeth Mason is with the World Health Organization, called WHO. She says the first 28 days of life are extremely important for a child's survival. Ms. Mason says survival is linked to the care the mother receives during pregnancy. Most importantly, she says it is connected to care during labor, childbirth and the baby's first hours. She says good care can save premature babies – those born too soon.

"We have new low-cost solutions that can reduce deaths of pre-term babies by up to three-quarters."

For example, she says mothers can receive injections to prevent labor that starts before the child is ready to be born. Kangaroo-mother care is another method of saving babies who arrive too soon. In this method, the baby is put into a pouch – a special small bag -- next to the mother's chest. The pouch helps keep the baby warm and provides closeness to breast milk.

Only five nations represent half of the deaths of children under five worldwide. The countries are China, the Democratic Republic of Congo, India, Nigeria and Pakistan. The report says Africa below the Sahara Desert has the world's highest child death rate. Ninety eight of 1,000 children born alive in the area do not survive to their fifth birthdays.

Children born in sub-Saharan Africa face more than 16 times the threat of dying before the fifth birthday than a child born in a wealthy country. But the yearly rate of deaths there has slowed down greatly since 1990.

Mark Young is a top health advisor at the United Nations Children's Fund, called UNICEF. He says economic development helps reduce child deaths. But he says poor countries that have a good plan can make major gains. For example, Mr. Young notes that Niger is one of the poorest countries in West Africa. Still, it has cut its rate of deaths of children under age five by almost sixty-six percent in the last twenty years.

He said Niger has done this through a series of actions led by the government and supported by UNICEF.

He says they also organized campaigns to provide a number of preventative interventions to the people.

There is an organization here in the United States that believes in letting foreigners get a first-hand look at democracy at work. Christopher Cruise tells us what one Middle Easterner saw when he came to observe the American legal system.

A law professor from Iraqi Kurdistan recently had a chance to tour some of the top law schools in the United States. The visits were part of a program at Syracuse University in New York. The Civic Education and Leadership Fellows program, or CELF, is funded by the State Department. Academics in the social sciences from the Middle East and North Africa spend a few months at the Maxwell School for Citizenship and Public Affairs at Syracuse. 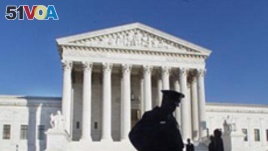 The Supreme Court building is on Capitol Hill in Washington.
The academic program offers course work and individual development of projects to help deepen understanding of democracy and democratic reform. The program at Syracuse is aimed at encouraging greater involvement in civic life.


Nasir Khalil Al-Assaf is an associate professor in the College of Law and Politics at Salahaddin University in Erbil.

While visiting the law schools, he said, he was impressed by the amount of educational materials available to students.

During the visits, Professor Al-Assaf also observed legal clinics in which law students work with people who need legal aid. Some legal education experts would like to see law schools in the United States increase practical work experience like this for their students. The professor says law education in Iraq focuses more on reading and theory than on practical work.

"After my visit to the more than 10 best law schools in USA, I observed that these schools focus on practical subjects through legal clinics. The clinics in [the] USA law schools make the students more qualified and make them ready to practice the law when they graduate from law schools."

He said Iraqi law students often face difficulties when they graduate because they lack practical experience. He noted a big difference between reading the law and practicing it.

At Syracuse, Nasir Kahlil Al-Assaf said he has developed new ideas about legal education. He created a project for when he returns home. He wants to create a bridge between the law school and the local community in Kurdistan.

The project calls for students and professors to volunteer in the community. He said he wants to adopt the example of law students working in legal clinics. That way, he says, poor people can get legal help at the same time students get more chances to practice being a lawyer. I'm Christopher Cruise.

And I'm Jim Tedder in Washington. Thank you for spending some time with us today. There are two more Learning English programs straight ahead, and world news at the beginning of the hour on VOA
Related Articles
go top